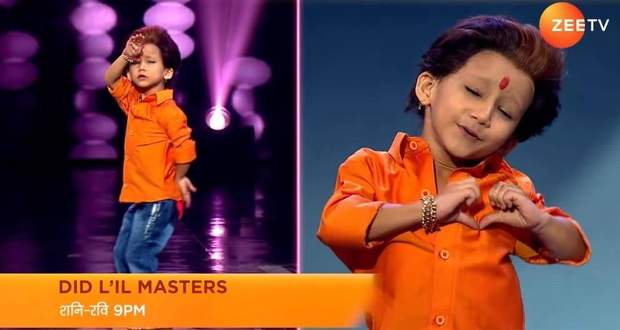 The recent promo for DID Lil Masters Kids Season 5 (12-06-22) for this weekend shows Remo asking Jay if he misses Mithun da and Jay replies yes.

Hearing this, Remo orders Jay to perform his famous tortoise dance as a tribute to Mithun da which generates laughter among everyone.

One of the other promos of DID Lil Masters 5 (12 June 2022) shows, Aadhayashree performing as junior Munna Bhai which impresses everyone.

Later Aadhayashree asks Shilpa to give some advice to her mom on diet as her mom is fatty.

This question amuses Shilpa and she replies laughingly that Aadhayashree's mom needs yoga.

After the announcement, Aarav from team Paul gives a killing performance on the song "Bang Bang".

His performance stuns everyone and then Jay invites his grandpa on the stage.

Aarav Nanu then gives everyone momo to test.

After that, Nanu, Aarav, Paul and Appun's grandpa give a funny dance performance.

Further, Sagar from team Paul and Nobojit from team Vaibhav set the stage on fire with their sizzling performance on "Sultan song" which impresses everyone.

After their performance, Remo and Sonali come to the stage to praise them.

Sagar Dadi then arrives at the stage and asks Sonali if she can prrform cast of evil eye on her.

While Jay is announcing another nsne, Bosco along with Rocket Gang cast make a gorgeous entry.

To continue the show, Aadhyashree and Rishita from team Vaibhav comes to the stage and Aadhyashree gets emotional seeing her grand parents.

After the reunion, Aadhayshee and Rishita's performance impresses everyone in the judge panel.

However, Rishita's mom tells everyone  that Rishita's grand parents don't care about her.

Later, Jay urges Appun grandpa to call his wife and he agrees.

Hearing this, she enters the stage and Appun grandpa confesses that he missed her a lot.

After that, Appun from team Vaibhav gives an heart warming performance with her grandpa which makes everyone emotional. She gets golden buzzer for her performance.

Bosco then tells everyone that God can not approaches us directly that's why he had made grandparents.

Later, Jay asks Sonali about her relationship with her grandparents.

To this, Sonali replies emotionally that her grandma was her emotional support.

Remo then asks Jay to perform tortoise dance in memory of Mithun da and Vaibhav and Paul join him for it.

Her performance impresses everyone and her Dadi and Father arrive at the stage.

Her dadi tells everyone that she supports Sadiya in everything.

After that, Mansi from team Vartika performs salsa which surprises everyone.

She even gets standing ovation from the judges.

Later Bosco reveals the first poster of Rocket Gang movie on DID set.

In the end, Mansi from team Vartika gets eliminated.

© Copyright tellybest.com, 2022, 2023. All Rights Reserved. Unauthorized use and/or duplication of any material from tellybest.com without written permission is strictly prohibited.
Cached Saved on: Thursday 26th of January 2023 05:14:46 AMCached Disp on: Thursday 9th of February 2023 05:36:07 AM