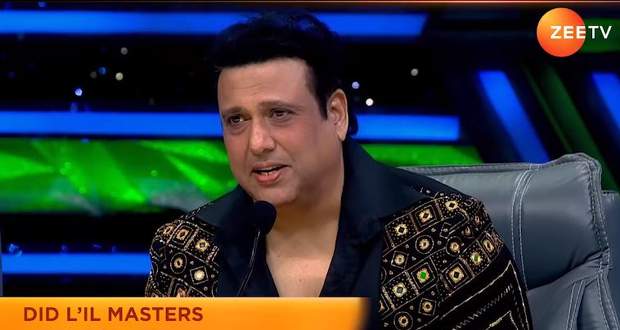 Zee TV's dance reality show, DID Little Masters 2022 will be entertaining the audience this week with an energetic superstar, Govinda.

The recent promo for DID Li'l Masters Season 5 (24.4.2022) for this weekend episode shows Govinda dancing with Mouni Roy on his iconic song 'Main Tho Raste Se Jaa Raha Tha'.

One of the promos also shows Aadhyashree's performance with skipper Vaibhav on Govinda's song. Govinda expresses his enjoyment and praises Aadhyashree by saying that even he can never dance like her.

The latest promo of DID kids 5th season 2022 for this weekend (24 April 2022) shows Sagar showcasing an amazing dance act after which he is surprised by his mother's entry with a cake to celebrate his birthday.

Sagar's mother mentions that she could never afford such a beautiful cake for Sagar ever but the stage of DID and Sonali gave him a lot of happiness and success too.

To get to know more, download Dance India Dance 5th season or watch the online latest full episode on both Zee television and OTT platform Zee5.

Today's DID Li'l Masters Season 5 24th April 2022 episode starts with Govinda making an iconic entry to the stage of DID Little Masters.

The show starts with the performance of Shristi from Team Vartika along with the skipper.

Govinda and the judges are impressed by her performance and Govinda also accompanies Shristi on the stage to dance to his movie's song.

The next performance is by Aadhyashree with her skipper Vaibhav. Their dance act as Nandu (Shakti Kapoor) and Raja Babu (Govinda) is filled with dance and comedy that amazes everyone.

To continue the show, Sagar comes to the stage and mesmerizes everyone with his performance that is perfect in every aspect.

Sonali Bendre surprises Sagar by inviting his mother to celebrate his birthday.

After Sagar's mother thanks Sonali for everything she is doing for him, Sagar cuts the cake and enjoys his special day.

The show continues with Appun energetic's performance that amuses everyone.

Further, Paul and Aarav's performance on various songs from Govinda's movies wins the hearts of him and the judges.

The next performer is Mansi and her style resembling her skipper Vartika is loved by all the judges. Govinda praises Mansi for being such a perfectionist.

At Mouni's request, Govinda dances with her on his song 'Main Tho Raste Se Jaa Raha Tha' which Mouni considers to be a dream come true dance for her.

The last performance is given by Rupsa and Sanvi from Team Paul. Their duet performance is filled with expressions, groovy moves, and perfection that sets the stage on fire.