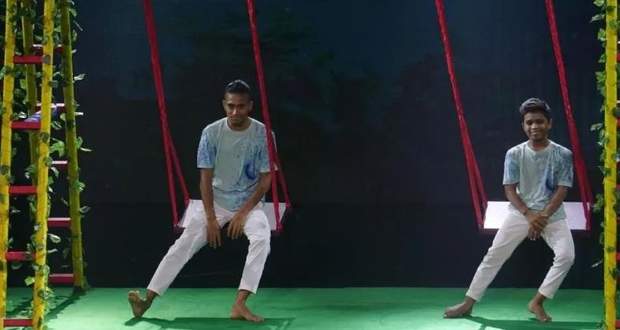 Zee TV's dance reality show, DID Little Masters 2022 will be entertaining the audience this week with the contestants of Dance India Dance previous seasons accompanying the little masters in their dance acts.

The recent promo for DID Lil Master Season 5 (28-05-2022) for this weekend episode shows previous season contestants of Dance India Dance who'll be paired with the Little Masters of DID Li'l Masters Season 5.

One of the promos also shows Nobojit's aerial performance which is performed for the first time ever in this season and it impresses everyone.

The latest promo of DID Little Master 5th season 2022 for this weekend (28 May 2022) shows Sagar's mesmerizing performance with Rupesh Bane which amazes the judges to a great extent.

Today's DID Lil Masters Season 5 28th May 2022 Double Dhammal episode starts with Jay welcoming senior dancers into the show and he also reminds the audience to vote for their favorite little masters.

Rupesh and Sagar perform first in freestyle dance form. After the performance, Rupesh’s mom distributes Mango juice and bread to everyone.

Further, into the show, Pankaj and Appun Pegu impress the judges with their amazing portrayal of Sita’s Agni pariksha. They get a golden buzzer from the three judges.

After the performance, Robambo along with Sanvi and Aadhyashree starts roasting Jay and it generates laughter in everyone.

Apun then gets into a dance battle with Pankaj and other senior DID masters. Her dance moves impress everyone.

Sanket and Nobojit showcase environmental problems with their ariel dance style and they perform some very hard stunts during the performance. The last part of the dance made everyone emotional.

To show respect, Remo kisses Nobojit’s feet and they also got a golden buzzer.

After that Jay asks Sanket about his experience dancing with Nobojit. To this Sanket replies that Nobojit’s body smell has made him uncomfortable and he further said that despite this Nobojit is a very hard-working child.

After that Dipika (Nobijit’s teacher) tells the audience that she is very grateful to Vaibhav for fulfilling her and Nobojit’s dreams.

Hearing this, Vaibhav confesses that he likes to make everyone’s life a little better.

Every team member from team Vaibhav comes to the stage and hugs Vaibhav.

To continue the show, Nobijit and Sanket get a salute from Robambo.

Next Rishta from team Vaibhav comes with Sadhvi and set the stage on fire with their sizzling Rajasthani dance performance.

Moni then expresses that she is waiting for the moment when Rishta will sign her first movie deal.

Later Rishita teaches Dipali and others dholida dance performances and everyone starts cheering for them.

Jay then once again reminds the audience that voting is available till tomorrow.

To continue the show, Remo asks all the skippers, seniors, and little dancers to make a joint performance.

Everyone agrees and then the dance performance begins.

The dance creates the perfect environment and everyone gets into the mood. Later, Srishti and Rituja from team Vartika amaze everyone with their Bollywood Lavni dance performance.

© Copyright tellybest.com, 2020, 2021. All Rights Reserved. Unauthorized use and/or duplication of any material from tellybest.com without written permission is strictly prohibited.
Cached Saved on: Wednesday 29th of June 2022 02:05:26 AMCached Disp on: Saturday 2nd of July 2022 08:24:01 PM