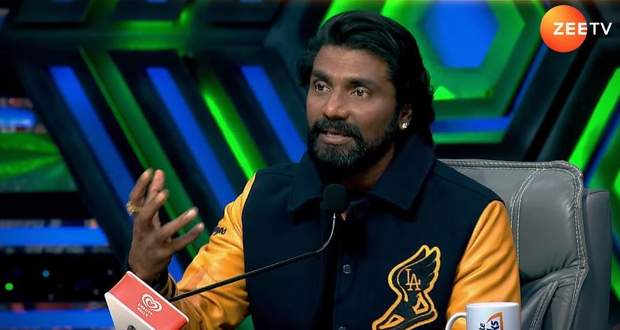 Zee TV's dance reality show, DID Little Masters 2022 will be entertaining the audience this week with the contestants of Dance India Dance previous seasons accompanying the little masters in their dance acts.

The recent promo for DID L'il Masters Season 5 (29-05-2022) for this weekend episode shows previous season contestants of Dance India Dance who'll be paired with the Little Masters of DID Li'l Masters Season 3.

Appun's purity in the performance touches everyone's heart and she receives an immense number of praises.

The latest promo of DID kids 5th season 2022 for this weekend (29 May 2022) shows DID Season 5 Finalist Rupesh Soni will accompany Mansi from Team Vartika in her performance that will win everyone's heart.

Today's DID Lil Masters Season 5 29th May 2022 episode will Akshay Kumar and Manushi Chillar making gorgeous entries and then they promote their upcoming movie Prithviraj.

To continue the show, Sadiya, and Saumya from team Vartika set the stage on fire with their amazing sizzling performance of Akshay’s iconic song "Tip Tip Barsa Pani".

Their performance left everyone stunned and Akshay praises Sadiya and Saumya for their dance and they get a golden buzzer for it.

Moni then requests Vartika to dance with Sadiya and Saumya and they agree.

After their performance, excited Akshay tries to press the golden buzzer again but unfortunately brakes it and the judges name the performance "buzzer braker performance".

Further, Adhyashree and Dipali from team Vaibhav impress judges with their dramatic yet Bollywood style performances.

Seeing their dance, Akshay along with Remo praises Vaibhav for his amazing choreography.

Adhyashree then asks everyone to come to the stage to play musical chairs with her and Akshay announces that he will give one lakh to the winner. Moni plays the songs for the competition and Sadiya wins and gets a one lakh cheque from Akshay.

After that Aarav and Rohan from team Paul make everyone emotional with their unique childhood vs adult theme performance.  They get a golden buzzer for their performance.

Remo along with other judges praises their concept and Sonali calls it a buzzer braker performance.

While Robambo gives Rohan and Aarav his ride Sanvi roasts Jay by calling him chameleon and it generates laughter among everyone.

After Aarav’s performance, Mansi and Rupesh from team Vartika get the standing position from judges and guests for their unique performance.

Remo then asks Rupesh, Saumya, Mansi, and Vartika to dance belly pop together and they agree. Their dance performance leaves everyone speechless.

Further, Sanvi and Shyam from team Paul amaze everyone with their acrobat performance. At the end of the dance, Shyam tries to give a rose to Sonali and Monali but Sanvi stops him. Everyone laughs at their conversation.

Sanvi then asks Akshay to give her some advice on martial arts and Akshay advises her to work hard.

Later every consistent pay Akshay tribute with their joint dance performance with his song mashup.

Seeing the performance, Akshay comes to the stage and expresses his gratitude to everyone.

After Akshay and Manushi leave, Shristi gets eliminated from DID Little Masters.

© Copyright tellybest.com, 2022, 2023. All Rights Reserved. Unauthorized use and/or duplication of any material from tellybest.com without written permission is strictly prohibited.
Cached Saved on: Wednesday 25th of January 2023 12:09:09 PMCached Disp on: Thursday 9th of February 2023 05:42:31 AM