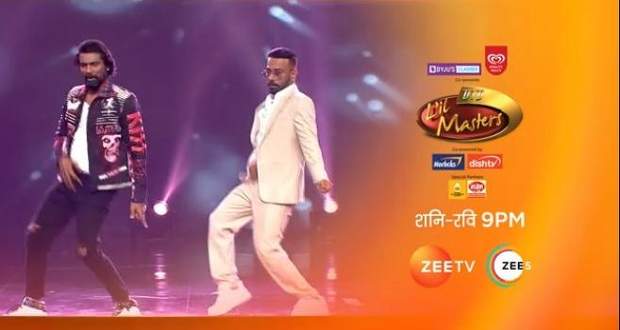 Zee TV's dance reality show, DID Little Masters 2022 will be entertaining the audience with various unique dance forms by the little masters of the show.

The recent promo for DID Lil Master Kids Season 5 (04-06-2022) for this weekend episode shows Remo and Dharmesh giving their iconic performance after a long time.

One of the promos also shows Nobojit falling flat on his face while dancing and it worries everyone. However, he recovers it quickly and resumes his dancing.

Seeing his dedication, the judges are speechless. They give a standing ovation to him for his fighting spirit.

The latest promo of DID Little Master 5th season 2022 for this weekend (4 June 2022) shows Terence, Geeta Kapoor and Remo doing fun on the sets of Dance India Dance Little Masters.

Robembo then tells everyone that today little masters will also give challenges to the judges.

Everyone agrees to this and Moni then gives Rishita a challenge to use a high prop on her dance.

Rishita accepts and gives an amazing performance which amazes everyone. She gets a golden buzzer from the judges.

After the performance, Rishita challenges Moni to eat Jalebi with her hands tied. Moni's struggle makes everyone laugh.

Further, into the show, Aarav from team Paul performs Kathakali on the "kala chashma" song as per Geeta's challenge. His performance impresses everyone, especially Geeta.

To celebrate Aarav's hard work at first Moni plays Conch and then Remo enters the stage to kiss Aarav's feet.

Even Robembo gives Aarav his respect by saluting him. After that, Aarav tells Geeta to dance on nails. Geeta agrees and dances to "Ghoomer" song.

Later, Terrance gives Aadhyashree the challenge to perform in a contemporary style and she agrees.

During her performance, she roasts Jay in a sweet way. She gets praised by everyone and Robembo agrees to give her a ride, crushing Jay's hopes. His and Aadhyashree's argument lightens everyone's mood.

To continue the show, Geeta asks Sadiya from team Vartika to create a fusion of Ariel and hip hop. She accepts and performs the dance gracefully.

However, Sadiya challenges Geets to guess the props.

Remo including Jay and Tarrence makes her nervous by using a serious voice tone.

Further, Remo gives Nobojit from team Vaibhav a horror act challenge and Nobojit's performance gives chills to everyone. His creepy smile creates a perfect horror environment in the show. His performance impresses the judges very much.

Jay then announces that Nobojit has become the most voted contestant in the show.

After the performance, Nobojit challenges Remo to perform MJ style while wearing a fluffy costume.

Later everyone joins him for the performance. Remo then asks Jay to stand still as everyone will throw a cake at him.

© Copyright tellybest.com, 2022, 2023. All Rights Reserved. Unauthorized use and/or duplication of any material from tellybest.com without written permission is strictly prohibited.
Cached Saved on: Thursday 26th of January 2023 05:14:55 AMCached Disp on: Thursday 9th of February 2023 05:29:06 AM