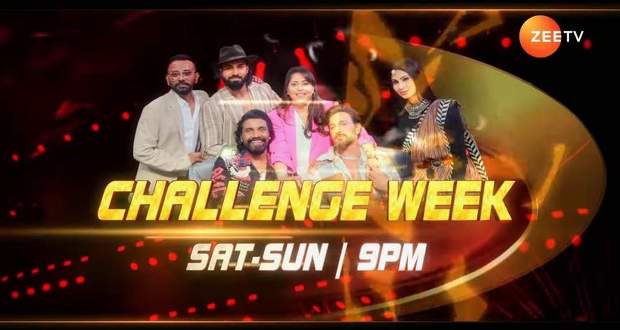 Zee TV's DID Little Masters 2022 will be entertaining the audience with various unique dance forms by the little masters of the show.

The recent promo for DID Lil Master Kids Season 5 (05-06-2022) for this weekend's episode shows Aadhyashree Upadhyay winning everyone's heart with her performance.

When Jai reminds Aadhyashree about Challenge week, she gives a challenge to Remo to wear an air-filled suit and dance in it. The scene becomes really funny when Remo dances in that fluffy suit on Muqabla song.

The latest promo of DID Little Master 5th season 2022 for this weekend (5 June 2022) shows Salman giving a sizzling performance.

Jay then announces instead of little masters making solo performances every team will perform as the judges' team.

At first, Vartika and her little masters come from team Terrance toli to perform robotics and it impresses everyone. The judges give a standing ovation to them for their killer performance. Terrence calls it a “chumeshwari performance”.

Further, Paul and his little masters from team Geeta ki Gang give a very emotional performance in which they portray the time concept very beautifully. It makes everyone emotional and Vartika comes to the stage to hug Pual.

Emotional Geeta then tells Paul that it was a blessing for her to choreograph Paul during his DID journey.

After announcing that Dharmesh’s dance audition tape is now the most viral DID video, Jay plays the video again on the stage.

Seeing the memory, Dharmesh along with Remo, Terrence, and Geeta get emotional. Now Dharmesh performs his iconic audition dance.

After his performance, Remo gives Appun a challenge to give an animal act dance. Appun agrees and dances as a lioness of the circus in the “Bejuva” song. Her aggressive dance act makes everyone happy.

After that, Manusi comes to the stage to give a storytelling performance as per Salman’s challenge and stuns everyone with her killer performance. She depicts the story of bangles.

Mansi tells Salman to perform belly dance on ice and as excepted Salman performs very gracefully. As the show progress, Jay informs everyone that Sanvi is injured so she will not performs today.

Later Dharmesh challenges Sagar to act with many cameras and his performance leaves everyone stunned in “Ranjhana song”.

After his performance, Remo comes to the stage to kiss his feet. He also gets a golden buzzer from the judges. Even Geeta comes to her knees to express her gratitude towards Pual.

Paul is declared the most creative choreographer today. In the end, Sanvi Negi from team paul gets eliminated.