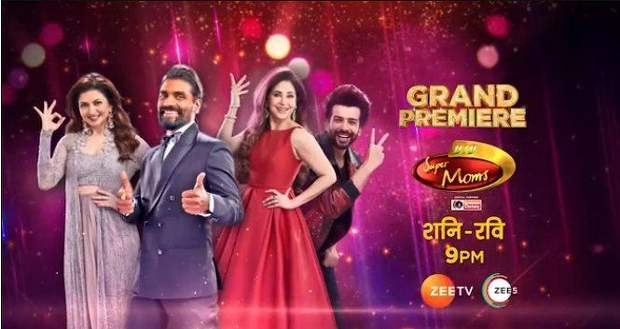 Remo, Urmila Matondkar, and Bhagyashree will be judging the show DID Super Moms.

The recent promo for season 3 DID Super Mom (16-07-2022) for this weekend shows the super moms making a super entry with their respective skippers.

This weekend is a Grand Premiere Week where the skippers will be revealed paired with the Super Moms.

One of the other promos for DID Super Moms (16 July 2022) represents skipper Bharat and Sadhna together.

The latest promo for DID Super Moms showcases skipper Shyam and Supermom Ridddhi.

Today’s episode starts with super moms making a gorgeous entry by kicking the Kalash(pot) and dipping their feet in Aalta(red liquid) like a new bride.

Sadhna says that it feels like she is starting another inning in her life.

After that Deepthi and skipper Anuradha portray Riddhi, Siddhi, and Ganesha’s mythology story through their dance on Ganesh Bandana.

They get praised by the judges for their energetic performance.

After that, Jay calls Krishna to the stage and he asks Krishna if he was making a Kabir Sing movie in his college.

Krishna then advises Remo to always compliment his wife.

Further, Khyati and skipper Ashish give a gorgeous performance of Alebela Sajna's song.

After the performance, Urmila gives Khyati payel to celebrate her.

Khyati’s mother-in-law gives Khyati the keys as a gift.

Varsha and skipper Vartika then surprise everyone with their belly dance to Dilber's song.

They get a golden buzzer for their performance.

Varsha’s husband then tells everyone that he feels proud of his wife.

Further, Alpana and skipper Vaibhav light up everyone’s mood with their funny performance as husband and wife in I don’t know what to do the song.

After their performance, the judges compliment them for it.

Alpana starts telling everyone about her husband’s struggle and Vaibhav along with Jay falls at her feet to stop her talking.

Later, Sadika and skipper Vivek impress the judges with their hip-hop dance to Dhoom song.

After their performance, Remo compares her dance moves with international dance.

Urmila then gives payel to Sadika’s husband so he can put the payel on foot.

After that, Seemrit and skipper Kumar surprise the judges with their classical dance to the Pyar Kiya Toh Darna Kiya song.

However, Seemrit announces that she will quit the show as her husband does not like her dance.

Hearing this, Remo once again tries to change Gaurav’s mind on a video call.

Gaurav says that he does not like Seemrit's dance as it gives them less time to spend together.

After the call cuts, Seemrit announces that she will think about it.

The Gutargu gives Jay a letter and nimbu pani for Bhaygashree by her husband Himalaya.

© Copyright tellybest.com, 2022, 2023. All Rights Reserved. Unauthorized use and/or duplication of any material from tellybest.com without written permission is strictly prohibited.
Cached Saved on: Monday 21st of November 2022 08:16:14 AMCached Disp on: Thursday 1st of December 2022 09:12:07 PM