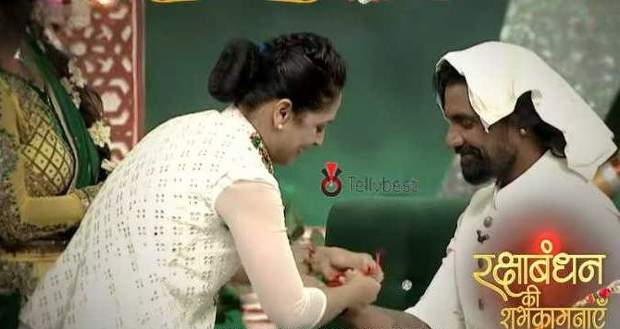 Zee TV's reality show DID Super Moms will entertain the audience this week with super moms' amazing performances with their skippers.

This week Govinda will join the judges as a special guest.

The recent promo for season 3 DID Super Mom (14-08-2022) for this weekend shows Govinda delivering his movie dialogue with so much passion.

After he finishes, everyone praises him for his amazing acting skills.

One of the other promos for DID Super Moms (14th August 2022) shows supermoms tying rakhi to Judge Remo.

After that, Remo thanks everyone for giving his childhood back.

Today’s episode starts with Jay wishing everyone happy Independence day and announcing that today they will celebrate the diversity of India.

After that, Supermom Sadhna and Skipper Bharat perform a reverse act on Desh Mere's song.

After the performance, Sadhna gets praised by the judges for her impressive act.

Supermom Khyati and Skipper Ashish then represent the Ganesha Chaturthi through their energetic dance to Deva Shree Ganesha song.

Once the performance ends, the judges give them compliments for their energetic performance.

Jay then reveals that Khyati’s husband has revealed that he always praises her for the performance as he has to go home too.

Hearing this, Jay asks every supermom's husband if they do them and they agree with it.

Meanwhile, Supermom Varsha comes to the stage and informs everyone that she is okay now.

They get a standing ovation from Bhagyashree for their performance.

Varsha then celebrates Holi with everyone on the stage ad puts color on each judge's feet.

After that, Alpana and Riddhi play lath mar Holi with their husband by beating them using a stick.

Even Remo and every supermom use this opportunity to beat Jay.

After that, Supermom Deepthi and Skipper Anuradha represent the diversity of Indian culture in the Bumro song.

After the performance, they get a standing ovation along with a golden buzzer from the judges.

Remo even gives his signature comment “now that’s what I call the performance”.

Further, Supermom Riya and Skipper Roza narrate the story of Shri Krishna’s life through their dance to the Wo Krishan Hain song.

After the performance, Urmila orders everyone to gather on the stage to break the Dahi-Handi.

Riya then asks Remo if they can tie rakhi on Remo’s hand.

When Remo agrees, every supermom ties rakhi on his hand and performs with him together.

After the performance, they get salami from Urmila for their amazing performance.

Afterward, everyone comes to the stage to perform Garba.

© Copyright tellybest.com, 2020, 2021. All Rights Reserved. Unauthorized use and/or duplication of any material from tellybest.com without written permission is strictly prohibited.
Cached Saved on: Saturday 1st of October 2022 09:12:52 PMCached Disp on: Thursday 6th of October 2022 04:54:27 PM