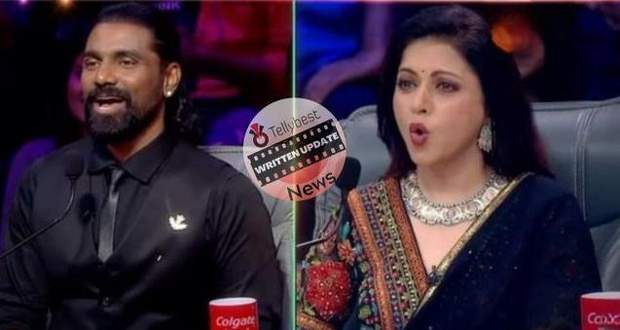 Zee TV’s reality show DID Super Moms will entertain the audience this week with super moms' excellent performances with their skippers.

This week top 5 Super Moms will be selected.

The recent promo for season 3 DID Super Mom (17-09-2022) for this weekend shows Supermom Sadhna Mishra and Skipper Bharat surprising everyone with their ariel performance.

As soon as the performance ends, Remo praises Sadhna for performing ariel without harness support.

One of the other promos for DID Super Moms (17 September 2022) shows Supermom Alpana and Skipper Vaibhav surprising everyone with their dance performance.

Afterward, Supermom Alpana and Skipper Vaibhav impress the judges with their romantic performance on the Keshariya song.

After the performance, Urmila praises Vaibhav for sprinkling orange color on the stage.

Alpana then says good things about every supermom.

In the meantime, Jay urges Supermoms’ husbands to tell if they want their wives to stay mute for some time.

When some of the husbands agree, everyone starts laughing.

Afterward, Supermom Varsha and Skipper Vartika set the stage on fire with their sizzling dance on the A Jane Ja song.

As soon as the performance ends, Varsha and Vartika get compliments from the judges.

Varsha then tells everyone that she will miss Vartika a lot in an emotional voice.

Further, all the Supermoms come to the stage to give “Guru Dakshina” to their Skippers.

Vaibhav then announces that he wants to fulfill every Supermom’s dream.

Once the performance ends, Bhagyashree tells Riddhi that her performance has reminded her of her own in-laws.

Alpana then stands up and announces that Riddhi and her husband fight like cat and mouse all the time.

In the meantime, Supermom Sadhna and Skipper Bharat give an ariel dance that stuns the judges.

Once the performance ends, Sadhna’s daughter comes to the stage and announces that everyone that Sadhana is a very hard-working woman.

Sadhna and her daughter then perform together on Tum Hi Ho Bandhu Sakha Tumhi song.

Later, Supermom Anila and Skipper Shweta surprise everyone with their lavni dance on the Pinga Ga Pori song.

After the performance, Anila gets a golden buzzer for her performance.

Jay then asks the judges to come to the stage to perform lavni and they agree to it.

Meanwhile, Jay gives every Supermom gift as a memory.

When Alpana comes to the stage, Jay gives her husband a tap so Alpnana can remember it.

After Alpana walks away, Jay gives other Supermoms funny gifts too.

Later the judges throw a farewell party to Supermoms and Remo urges Alpana to open the wine.

Further, Supermom Sadika and Skipper Vivek give a sizzling performance and get the golden buzzer for it.

Sadika’s husband then comes to the stage to propose to Sadika in front of everyone.

© Copyright tellybest.com, 2022, 2023. All Rights Reserved. Unauthorized use and/or duplication of any material from tellybest.com without written permission is strictly prohibited.
Cached Saved on: Wednesday 25th of January 2023 10:14:45 AMCached Disp on: Monday 6th of February 2023 06:15:45 PM