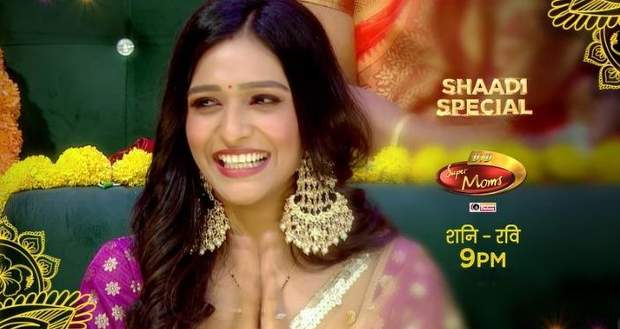 This week Lakshmi and Neelam from the Bhagyalakshmi serial will come as special guests.

The recent promo for season 3 DID Super Mom (23-07-2022) for this weekend shows Riddhi and her skipper Shyam setting the stage on fire with their performance of the dhinkachika song.

After their dance performance, Riddhi informs Lakshmi that she wants to go on a honeymoon with her husband and have a daughter like Lakshmi.

One of the other promos for DID Super Moms (23 July 2022) represents Babli and her skipper Rutuja giving an energetic performance.

After the performance, she reveals that she ran away with her husband to marry him without her parents' permission.

However, her parents arrive on the stage to give them their blessing.

Today’s 23 July 2022 episode starts with the welcome of Neelam and Lakshmi from the serial Bhagya Lakshmi by dancing together with other contestants.

Performances start with Ashish and Khyati on stage for their performance. Their semi-classical, little funny performance makes the judges burst into laughter.

Remo compliments Khyati for her beautiful expression and for their outstanding moves.

Then Jay asks Neelam for her views, and she replies that she has no words for such a superb act and starts asking Khyati's mother in law why she's defaming all the mother-in-law by being friends with her daughter-in-law. All burst out laughing with their conversation.

Complemented for being as energetic as her name by Remo. They were also titled by Sarvottam performance by all the three judges.

Babli shares her marriage story, not being favoured by her parents she elope from home to marry her husband. She till now regrets that her parents were not a part of it.

At the same time, her parents come walking with watery eyes and promise to remarry her to the same guy. Babli's eyes filled with tears of happiness and thank all the judges from the bottom of her heart.

Later, Ridhi and Shyam come and set the stage on fire with their performance of the "Dhingachika" song. They were titled by Sarvottam performance.

However, Ridhi tells how ambitious she's about going on the honeymoon but they don't go but promises her husband that she will win the show and go abroad for the honeymoon.

The next performance is of Vartika and Varsha where Varsha expresses that in their wedding there is no phera, no mangal sutra, no sindur and after giving a smile gets back to their performance and as reward judges set up their marriage scene by making them wear the wedding attire and doing all the rituals of an ideal wedding.

Later, Sadika and Vivek are called for their performance realizing the importance of Qubool Hai. They get a standing ovation from the judges and are complimented for being danced like a soul.

Sadhika and her husband Waseem enjoy their Haldi as they didn't do at their wedding.

Later Deepika and Bhawana perform and are appreciated for the beautiful performance.

Jay asks Remo where had he gone for the honeymoon to which he replies there is nothing to share but he married her wife thrice and he didn't have any complaint about it.

Later, Urmila says she went to the Jannat of India that is Kashmir.

Bhagyashree also went on to short and sweat honeymoon in Bailgao for 5 days.

End of today's episode of DID Super Moms.

© Copyright tellybest.com, 2022, 2023. All Rights Reserved. Unauthorized use and/or duplication of any material from tellybest.com without written permission is strictly prohibited.
Cached Saved on: Wednesday 25th of January 2023 03:28:37 PMCached Disp on: Thursday 9th of February 2023 08:07:25 AM