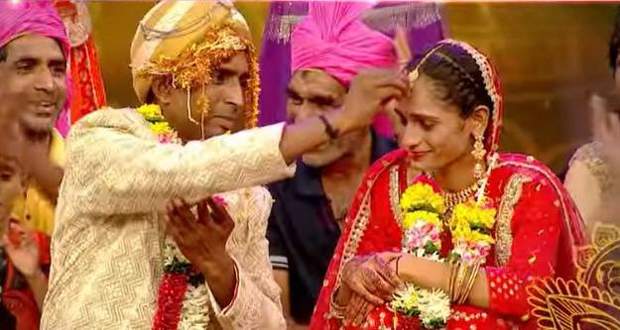 This week Lakshmi and Neelam from the Bhgayalakshmi serial will come as special guests.

The recent promo for season 3 DID Super Mom (24-07-2022) for this weekend shows super mom Varsha giving a gorgeous performance.

After the dance performance, she reveals to everyone that only four people attended her marriage ceremony.

To fulfill her wish of big weeding, the judge arranges a wedding ceremony on the stage for her.

One of the other promos for DID Super Moms (24 July 2022) represents every super mom urging the viewers to see their journey as super moms.

Today’s episode starts with Jay welcoming Anila and skipper Shweta to the stage for performance.

They impress the judges with their descriptive performance about each marriage ornament on  "Ishq".

After their performance, Bhagyahsree declares that they have set the singhar mood in the show.

Even Urmila salutes her.

Meanwhile, Jay calls Anila’s husband to the stage and Urmila asks him to narrate some of his marriage incidents.

Instead of Anila’s husband replying, Anila replies that she only met him two times before marriage.

Hearing this, Urmila orders Anila and her husband to perform a ring searching ceremony on stage and Anila wins.

Later, Alpana and skipper Vaibhav narrate the story of her and her husband through their performance on Bollywood mashup.

After their performance, she gets praised by the judges for her energy.

Alpana’s husband then surprises her with seventeen gifts as they have crossed seventeen years in their marriage.

After that Deepthi and Anuradha come to the stage to perform but before performing, Deepthi welcomes Remo’s wife Lizel to the set.

After their performance, Remo announces they narrated his story perfectly.

Remo and Lizel get into a funny argument about Remo.

They get a golden buzzer for their performance.

Sadhna and her husband tell everyone that they don’t have any special stories to narrate today.

However, Sadhna’s daughter announces that she wants a destination wedding for her.

After their performance, Bhagyashree says Riya has narrated the story of million Indian married women who face domestic violence.

However, Riya's Dad comes to the stage and begs for forgiveness from her for marrying her off at such a young age.

After that, Seemrit and skipper Kumar represent Shiva and Parvati’s marriage story through their performance on "Manwa Lage".

They get praised by the judges for their dance moves.