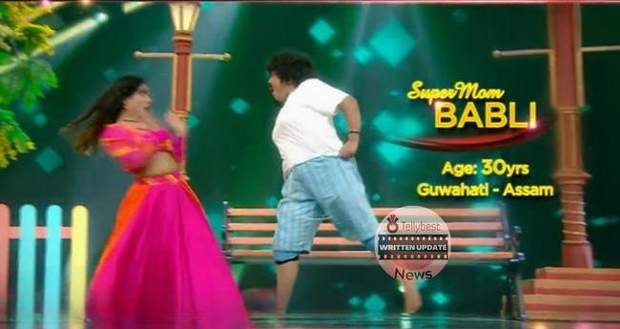 This week Chunky Pandey and Shakti Kapoor will join the judges as special guests.

As the week is a comedy special week, every supermom will showcase their comic side.

The recent promo for season 3 DID Super Mom (28-08-2022) for this weekend shows Supermom Babli and Skipper Anuradha performing as Shakti Kapoor.

After the performance, Shakti urges Babli to give him the rope of her shorts which makes everybody laugh.

Later, Babli serves a dish to Remo to eat and to praise her, Remo falls to the ground pretending to be unconscious.

One of the other promos for DID Super Moms (28 August 2022) shows Supermom Riddhi and Skipper Shyam impressing everyone with their comic performance.

Today’s DID Super Moms 3 episode starts with the continuation of the comedy special theme.

Every supermom family comes to the stage and dresses up as a comic character.

Afterward, Supermom Anila and Skipper Shweta represent housewife and maid comedy through their dance on the Wajle Ki Bara song.

After the performance, they get compliments from the judges for the dance along with the golden buzzer.

Afterward, Anila’s husband praises her for giving him the chance to appear on DID.

He even proposes to Anila on the stage and asks her to marry him again.

They even perform on the Tum Hi Ho song and recreate Ashique 2 movie jacket scene.

After that, Supermom Sadika and Skipper showcase Bahubali's characters Kadapa and Maharani Shivangi in a funny way on the Dhating Nach song that makes everyone laugh.

As expected, they get the golden buzzer for the dance.

Sadika’s husband comes to the stage to complain against Sadika and his mom as he thinks he takes care of his child with full attention.

Jay then shows a video where everyone is asking Sadika’s husband if he is taking care of his child or not.

Once the performance ends, they get a golden buzzer for their dance.

However, Jay then declares that his wife looks chudal without makeup.

Seeing him doing this, every supermom's husband agrees with it.

To prove their point, Anila’s husband, Riddhi’s husband, and Alpana’s husband do their wives' makeup and indeed make them chudal with bad makeup skills.

Later, Supermom Riddhi and Skipper Shaym impress the judges with their dance to the Meri Marzi song.

After the performance, Bhagyashree compliments Riddhi by calling her stubborn Tiwari.

To make Riddhi happy, her children come to the stage to surprise her.

Later, Supermom Khyati and Skipper Ashish surprise the judges with their lavni.

After the performance, they get praised by the judges.

Afterward, Supermom Deepthi and Skipper Anuradha showcase the funny banter of society aunties through their dance on the Dama Dam song.

As expected, they get praised by the judges for the dance.

Later, Deepthi and Deepika got eliminated from the show.