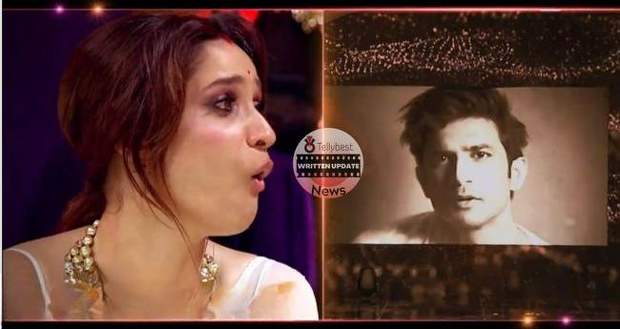 This week Pavithra Rishita's team will join the judges as special guests.

The recent promo for season 3 DID Super Mom (03-09-2022) for this weekend shows Supermom Sadhna and Skipper Bharat giving tribute to Sushant Singh Rajput through their performance.

Seeing Sushant’s picture, Ankita gets emotional and tears roll down from her eyes.

She informs everyone that Sushant was not only her co-actor but also a good friend.

One of the other promos for DID Super Moms (3 September 2022) shows Supermom Riddhi and Skipper Shyam impressing everyone with their performance.

Jay then calls Supermom Babli and Skipper Rutuja to represent Archana and Savita through their comic performance on Hangmama ho Gaya song.

Their comic timing impresses everyone and Babli gets an amazing compliment from Usha for her amazing portrayal of Savitha.

Usha then gives Babli homemade modaks as a gift.

After that, Supermom sadhana and Skipper Bharat give tribute to Sushant Singh Rajput through their emotional dance on Kitni Baatein song.

After the performance, they get compliments from the judges for their emotional act.

Ankita then gives credit to Sushant for her success but Usha stays silent as she cannot describe her feeling for Sushant.

Further, Supermom Varsha and Skipper Vartika set the stage on fire with their powerpack Hip-hop dance on the Eisa Jadu Dala Re song.

Once their performance ends, they get a golden buzzer along with amazing compliments from the judges.

Ankita then joins Vartika and Varsha on the stage to perform the same song.

To make Ankita’s day, Remo gives Ankita a golden buzzer for it.

After that, jay asks Varsha to share with whom she has Pavithra Rishta and she urges her landlord to come to the stage.

As per Varsha, her landlord has supported her in her low times.

Once the performance ends, the judges shower Riddhi and Khyati for their dance.

Rddhi’s husband then informs everyone that Riddhi acts like a Dabang in real life.

Afterward, Ankita and Usha switch roles as mother-in-law and Dauther-in-law, making everyone laugh.

Later, Supermom Alpana and Skipper Vaibhav represent Archana and Manav’s love story through their dance on the Phela Pyar song.

After the performance, Usha informs everyone that Alpana’s performance reminded her of Sushant.

Vaibhav then announces that Alpana asked him to act like her husband so she can do the romantic dance.

After that, Supermom Sadika and Supermom Sadhna light up everyone’s mood with their belly dance on the Ek Do Tin song.

Once the performance ends, they get showered with compliments.

© Copyright tellybest.com, 2022, 2023. All Rights Reserved. Unauthorized use and/or duplication of any material from tellybest.com without written permission is strictly prohibited.
Cached Saved on: Wednesday 25th of January 2023 03:03:22 PMCached Disp on: Monday 6th of February 2023 06:05:28 PM