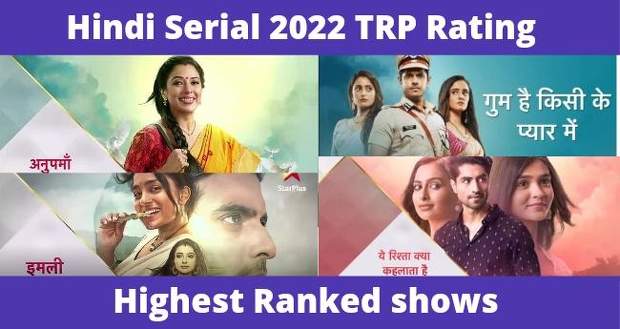 Based on Serials TRP ratings, last year brought the viewers a lot of entertainment in the TV Soap Industry with serials, soap operas, and shows such as Anupama and Ghum Hai Kisi Ke Pyaar Mein while we hope that the year 2022 also does the same for the audience.

The TRP of shows is based on online platforms such as Voot.com, Hotstar.com, Zee5.com and SonyLIV.com while considering the BARC TRP ratings as well.

As per the TRP sources, the top serial of last year is Star Plus channel Anupama has again managed to take the crown for the first week of the new year while Ghum Hai Kisi Ke Pyaar Mein and Imlie are also after it taking the positions second and third respectively.

Star Plus has also managed to grab the top five ranks as Yeh Rishta Kya Kehlata Hai is at the fourth position with Yeh Hai Chahatein coming in at fifth rank.

Colors TV makes its entry into the top ten with Udaariyaan coming in at sixth place while Zee TV's Kumkum Bhagya, Kundali Bhagya and Bhagyalaxmi take the positions seventh, eighth, and nineth.

Lastly, Star Plus again makes its entry into the top 10 with Saath Nibhana Saathiya 2 at the tenth rank.

The table below shows the rankings and ratings of the Top 20 Hindi TV serial TRP online and their TRP Points for week 1, January 2022.

© Copyright tellybest.com, 2020, 2021. All Rights Reserved. Unauthorized use and/or duplication of any material from tellybest.com without written permission is strictly prohibited.
Cached Saved on: Thursday 20th of January 2022 10:52:22 AMCached Disp on: Friday 21st of January 2022 04:15:48 PM