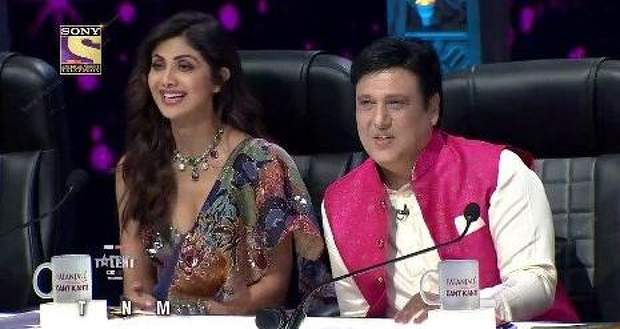 Sony TV's India’s Got Talent 9 continues the colorful entertainment of the Holi celebration with Govinda and Karishma Kapoor joining in as special guests.

The recent IGT9 promo for Sunday (13-03-22) shows the performance by Bombfire makes the judges shower compliments with Govinda binging in for a dance session with the girls.

Manuraj and Divyansh again gain the golden buzzer from the judges for their outstanding performance.

Karishma Kapoor takes on the duty to give Manuraj lessons on being a hero which sparks laughter among the judges and audience.

The new promo of India’s Got Talent 9 for 13 March 2022 gives a sneak peek of the special performance presented by all the contestants on the occasion of Holi.

However, the atmosphere gets gloomy with the surprising news of three contestants getting eliminated this week.

To download India's Got Talent 9 all episodes or watch IGT online, the full latest episode, go to the SonyLiv app or sonyliv.com

Today’s India’s Got Talent 9 episode starts with all the contestants joining in for a special Holi performance.

Arjun announces that next week the Moj wildcard entry will be introduced to the contestants.

The first act is presented by Bombfire who sizzle the whole stage with their hotness and amazing dance.

Govinda joins them for a little dance session after which the judges welcome the famous music director of Pushpa, Devi Sri Prasad.

This week too, the mind-blowing duo, Divyansh & Manuraj get a golden buzzer from the judges for their terrific performance.

Karishma Kapoor gives Manuraj dance lessons on being a hero which makes the entire set burst out in laughter.

Coming up next, Warrior Squad amazes the judges with their, as usual, blockbuster stunts.

Tuning in with Rishab, Govinda sings a song dedicated to Karishma Kapoor.

Making the whole IGT set groove with his beats, Devi Sri Prasad presents a special performance along with Badshah and other contestants.

However, ruining the happy atmosphere, Arjun announces the Bottom 5 of this week which are, Bombfire, B.S Reddy, Crazy Hoppers, Divyansh & Manuraj, and Rishab Chaturvedi.

The judges, after an intense mental breakdown, announce to save Divyansh & Manuraj, and Rishab.

As the other contestants break down into tears, the judges announce that it was a prank and no one is going to be eliminated this week.

The episode ends with the contestants celebrating their survival for another week.