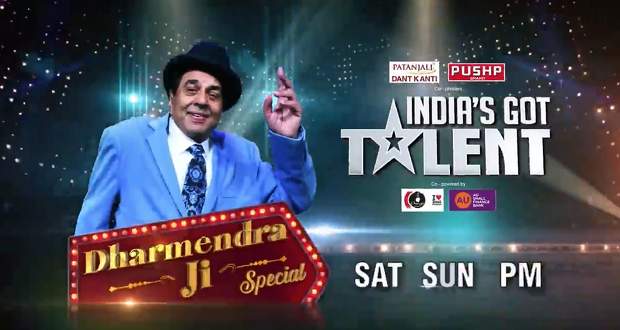 In the recent promo of the show for the weekend(19 Feb 2022, 20 Feb 2022), Dharmendra is seen making a high-powered entry on the stage of IGT9 as he grooves on his song 'Yamla Pagla Deewana'.

In the latest promo of IGT 2022, the Demolition Crew which is a former semi-finalist of Dancing Superstar is seen entertaining the judges and Dharam Ji with their dazzling performance on Dharmendra's songs.

Today’s India’s Got Talent 9 episode starts with the legendary actor Dharmendra coming on the IGT 9 set as a guest who has been a judge in IGT season 3.

As Dharmendra settles at the judging panel, the episode proceeds with the Bad Salsa 2.0 coming on the stage to present their performance.

Following after the Bad Salsa comes the group Demolition Crew on the IGT 9 stage with their amazing dance moves and flabbergasting stunts.

The stunning performance of the group on the song ‘Rafta Rafta’ wins the hearts of all the judges and the audience.

Next comes the sand artist Nitish Bharti who with his amazing talent portrays the journey of life of the guest judge in today’s episode “Dharam Ji”.

The heart-touching performance of Nitish makes everyone sentimental, bringing moisture in their eyes.

Moving further into the episode, the Workout Warriors present their body balancing and Calisthenic act which the IGT 9 judges enjoy a lot.

The absolute performance of Ishita earns her the Golden Buzzer from the judges Baadshah and Manoj Muntashir.

Arjun Bijlani, the host of IGT 9, calls the music band Euphony that creates a romantic atmosphere on the set singing the combination of Dharma’s songs.

After Euphony’s marvelous performance, the Sufi Nizami Brothers come on the stage and sets a peaceful environment with their Kawali.

The wonderful performance of the group earns them a standing ovation from all the people present.

Following Saathi, the Warrior Squad comes on to IGT 9 stage with their amazing stunts and moves and gets judges bouncing in their seats with their fully energetic performance.

Next comes the singer Rishabh Chaturvedi who sings Dharam Ji’s one of the very famous songs ‘Aaj Mausam’ stealing the hearts of the guest judge and all the other judges with his melodious voice.

Moving further into the episode, Arjun calls the Bomb Fire Crew who sets the IGT 9 stage on fire with their sensual and hot dance performance.

Dharam Ji loves the performance so much and joins the girl gang on the IGT 9 stage post their dance act.

B.S. Reddy once again amazes the judges by creating illusions with his mind-blowing magic tricks.

Further on, Dharam Ji and the IGT 9 Kirron Kher recreate one of the famous scenes from their movie ‘Apne’ and entertain the audience.

Thereafter, the duo of Divyansh and Manuraj comes on the stage and gives a heart-touching performance with their awesome combination of flute and beat-boxing.

The judges acknowledge the performance by giving them the golden buzzer.

At last, comes the Crazy Hoopers to present their performance. The acrobatic fusion with dance on the song ‘Vande Matram’ touches judges' hearts.