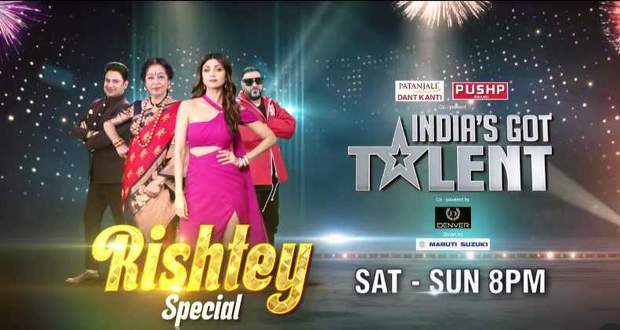 Sony TV's India’s Got Talent 2022 (IGT9) continues to entertain its viewers with its amazing performance and fun-filled episodes.

The recent promo of India’s Got Talent 9 for this weekend, Saturday (19-03-2022) shows Manoj Muntashir telling the story of his childhood and thanking his mother for educating him.

Manoj’s mother appears as a judge on the sets of IGT 9  and comforts him as he breaks down remembering the harsh times of his past.

The second promo of India's Got Talent for Saturday (19 March 2022) shows a sizzling performance by Badshah along with Tamanna Bhatia and Malaika Aurora Khan as the lead performers.

Two beauties of Bollywood, Tamanna, and Malaika enjoy the performances as the next guests for this weekend’s IGT9 episode.

To get to know more, download India's Got Talent 9 all episodes or watch IGT 2022 full latest episode online, go to the SonyLiv app or sonyliv.com

Today’s India’s Got Talent 9 episode starts with the grand welcome of Malaika Aurora Khan and Tamanna Bhatia who join the show as guests.

On the occasion of Rishtey Special, Kiran Kher’s son, Sikander Kher surprises his mother by joining in with the judges.

The first act is presented by Euphony, who make their blockbuster re-entry through wild card opportunity.

The judges give a golden buzzer instantly to Euphony as they rock the stage with their engaging tunes.

Crazy Hoppers come on the stage next with a grand tribute to Lord Shiva through their performance and succeed in receiving the golden buzzer from the judges.

Getting the gold buzzer again this week, Ishita Vishwakarma succeeds in bringing tears in everybody’s eyes with her melodious singing.

The next performance is presented by the Demolition Crew who portrays the soldiers of our country through their dance stringing an emotional chord with the audience.

Their act makes them receive a golden buzzer from the judges.

Next in line, Krish and Shalini drop the jaws of the judges with their mind-blowing aerial acts and stunts.

Malaika and Tamanna put forward a sizzling performance along with Badshah making the judges groove with them.

Manoj Muntashir’s mother appears as a guest and enjoys the soulful act by Nitish Bharti through his sand art.

The episode ends with a sneak peak of the next day’s IGT9 episode.

© Copyright tellybest.com, 2022, 2023. All Rights Reserved. Unauthorized use and/or duplication of any material from tellybest.com without written permission is strictly prohibited.
Cached Saved on: Wednesday 25th of January 2023 06:03:59 PMCached Disp on: Monday 6th of February 2023 01:25:19 AM