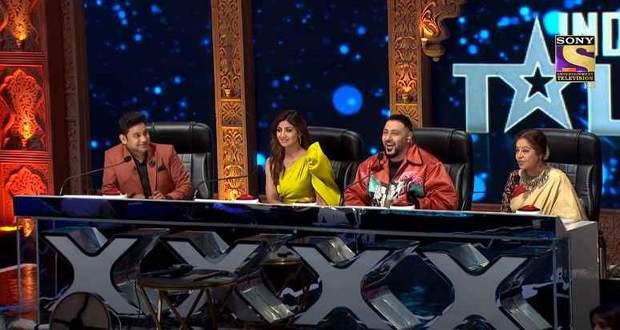 Sony TV's India's got Talent started its grand auditions the previous week with hordes of talent, some unique, some sensational making their way to the stage of IGT 2022.

With a new panel of judges of IGT9 including Kiran Kher, Shilpa Shetty Kundra, Badshah, and Manoj Muntashir; the show aired its first two episodes packed with entertainment and talent.

India's Got Talent 9's recent promos for this weekend (22-01-22, 23-01-22) introduces a duo named Krish and Shalini who perform aerial acrobatics while being blindfolded.

With the commencement of outdoor stunts, a contestant named Gaglina performs aerial gymnastics at a height of 60 feet making the judges scream with anxiety.

Another promo for 22 Jan 2022, 23 Jan 2022 of IGT 9 shows the attempt of a group to break the world record in a stunt. They perform an act by layering people with 15 kg nail beds in between and breaking a piece of rock on the pillar of people.

IGT2022 Judges are left speechless by this act and get horrified to see the stunt happen.

Today’s India’s Got Talent 9 episode starts with a little five-year-old girl, Pragya coming on the show with her mom Mukta to show her talent of singing among the judges and the audience.

The little girl steals judges hearts with her cuteness and performance as she sings the Bollywood classical song ‘Ghar More Pardesiya’ in her melodic voice along with her mother.

Shilpa Shetty goes on the stage and hugs Pragya while Badshah requests Pragya to sing a song with him as he calls himself Pragya’s fan.

Furthermore into the episode, judges get the pleasure of meeting IGT season 4 winner, the remarkable Bad Salsa; the duo that represented India on the international stage of AGT.

On asking why the duo has come on the show again, Bad Salsa tells that they are there to introduce their next-generation, Bad Salsa 2.0, which will be competing with the other contestants for India’s Got Talent title this season.

The judges laugh when the duo introduces their next-generation members with funny nicknames like Feku Prasad a.k.a. Bibhash and Jalebi Bai a.k.a. Srijanath.

Judge Kiran Kher asks for the significance of their nicknames to which Bibhash answers that in their dance there are many lifts and stunts so he keeps throwing Srija which gives him the name of Feku Prasad.

While Srija is called Jalebi Bai as she does a lot of spins in her performance.

After the introduction, Bad Salsa 2.0 presents their dance performance and bags a seat in the next round of the show.

As the episode continues, many contestants come and showcase their talent among which a group from Rajasthan brings the Indian folk music on the stage.

The group in the leadership of Ismail Khan sings the beautiful song ‘Ghul mil Launda’ in folk style mixed with raps.

Judges enjoy a lot and once again lose their hearts to another group of contestants.

Before moving to the outdoor auditions, one group called ‘Workout Warriors’ impresses judges and makes their place in the next round.

During the outdoor auditions in the stunt yard, Gaglina from Guwahati, Assam presents her aerial dance at the height of sixty feet on the hot air balloon.

Gaglina’s parents join her as the spectators to increase her morale.

After Gargalina bags her seat in the show, magician M.P. Ansari comes as the next contestant to impress judges with his magic tricks.

M.P. Ansari adds the comic element to the show while entertaining the judges with his magic.

The episode ends with the judges giving an entry to the magician in the next round.

Today’s India’s Got Talent 9 episode starts with the entry of a new contestant Nupur Chaudhary, who so gracefully presents her talent of pole dancing.

Judges get so impressed, not only by Nupur’s performance but also her mother-in-law Nanda Shetty who calls Nupur Bahu-friends-forever (BFF).

After Nupur gets a ticket to the next round, the Sufi Nizami brothers come on the stage of IGT9.

The Nizami Brothers sing a beautiful kawali song ‘Aaya Tere Dar Par Diwana’ earning a standing ovation from all the judges at the end of their performance and also entry to the next round of the show.

Furthermore into the episode, judges come across Vispi Kasad and his wonderful karate team of women.

The team bags to break the world record of the most layered bed of nails sandwich female on the stage of IGT9.

All the judges along with the audience are left stunned by the record-breaking and making act of the team.

Many auditionees come and go failing to impress the judges with their talent.

The wait for the next contestants ends with the arrival of IGT4 finalist Nitish Bharti, a fine sand artist.

Nitish wins judges' hearts with his amazing artistic performance glorifying the value of a mother in a person’s life and earns the golden buzzer from judge Shilpa Shetty.

Moving to the outdoor auditions in the stunt yard, Gunjan Sharma from Bihar gets judges all jumpy in their seats with his mind-blowing stunts done without any safety measures.

At the end of the episode Krish and Shalini from Rohtak, Haryana perform on the song ‘Banden hai hum uske’.

Krish and Shalini’s aerial dance act with both of them being blindfolded gets judges biting their nails with fear and anxiety.

With a yes from all the judges, the duo enters the next round.