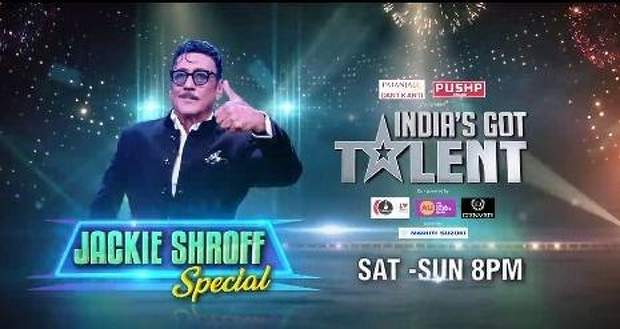 Sony TV’s reality show, India’s Got Talent 9 (IGT 9) is going to enter its second week with the top 12 after its grand premiere last weekend.

The atmosphere gets thrilling and entertaining with the judges cracking jokes with Jackie Shroff and the explosion of talent from the performances of the contestants.

Jackie Shroff joins them to dance on the beat and gets on his knees to acknowledge their great performance.

Another act that makes the judges drop their jaws is that of the Demolition Crew, Kiran Kher goes on the stage to groove on the song along with them while Jackie Shroff again goes on his knees submitting to their great talent.

Today’s India’s Got Talent 9 episode starts with the grand entry of Jackie Shroff who comes to join the judges as a special guest.

The inauguration of the performances is done by the duo of Bad Salsa 2.0 who sweeps the awes of the judges with their marvelous balancing acts and salsa fire.

The judges give them a standing ovation appreciating their wonderful performance.

The next act is presented by the band Euphony who makes the whole set groove with their no.1 singing talent and beatboxing skills.

Jackie Shroff joins them for performance and mixes his voice with theirs.

Making the atmosphere sizzle with fire, the next act by Bombfire leaves the judges shocked.

Jackie Shroff kneels in front of them to pay respect to them as they groove with him on his song.

The judges get immersed into melody by the singing of Ishita Vishwakarma who sings with her sweet voice creating magic in everyone’s hearts.

Next, the girls scream seeing the hotness of the Workout Warriors who makes the judges drop their jaws by their balancing formations.

Shilpa Shetty compliments their performance and the hotness with which the judges tease her.

The next act makes the atmosphere emotional as Nitish Bharti portrays the life story of Jackie Shroff through his sand art.

Last but not least, B.S Reddy makes the judges go speechless with his magic leaving the audience to wonder how something like that is possible.

The episode ends with Jackie Shroff doing a magic act with B.S Reddy and figuring out how he stuns the audience every time with his unbelievable magic.

Today’s India’s Got Talent 9 episode starts with a power-packed performance by Crazy Hoppers which leaves the judges in awe.

Guest Jacky Shroff congratulates the contestants for their great efforts.

The second performance by Rishabh Chaturvedi creates a melodious mood in the atmosphere, which gets him a Golden Buzzer.

Demolition Crew leaves the judges speechless when they present ‘lavni’ with a twist.

Impressed by their blockbuster stunts and performance, the judges give them a golden buzzer securing them a spot in the next level.

The fourth performance by flutist Manu Raj and beatboxer Divyansh makes the judges jam along with their tunes as they perform the iconic tunes dedicated to Jackie Shroff.

As they succeed in impressing the judges, they receive the Golden Buzzer as well.

The news of Warrior Squad being invited to America's Got Talent gets disclosed.

However, at the end of the episode, euphony, Sufi Nizami, and Sathi Dey were sent to the bottom three.

The episode ends with Sathi Dey and Sufi Nizami getting eliminated and bidding their farewell from IGT 9's journey.