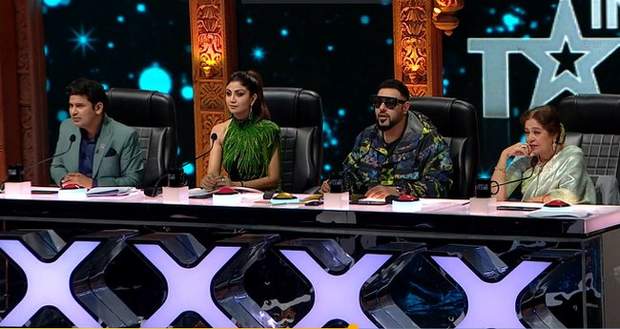 Sony TV's reality show India's Got Talent season 9 (IGT 9) has been entertaining its viewers for the last two weeks by bringing immense talent into the spotlight, judged by the talented judges, Kirron Kher, Shilpa Shetty, Baadshah, and Manoj Muntashir.

The recent promo of IGT9 for this weekend (29 Jan 2022, 30 Jan 2022) episodes show Gaurav Singh from Faridabad, Haryana, presenting his talent of hand-balancing Yoga before IGT9 judges by balancing his entire body weight on his hands on two rods piled up with bricks at a height of more than 10 feet.

In the latest promo of IGT 2022, a dance group earns the golden buzzer from the judges by their fantabulous dancing act on Ganpati Bappa that glorifies his various profiles.

Moving ahead to the outdoor auditions in the stunt yard, a contestant, completely bounded in chains, claims to come out of a blazing hut by getting himself free from the chains.

The dangerous act has gotten India’s Got Talent 9 judges terrified.

On the stage of IGT 9 this weekend (29-1-2022, 30-1-2022), Praveen from Alwar, Rajasthan attempts to balance a gas cylinder along with a probe consisting of many mud pots on the pillar of two glasses placed upside down over his head.

Impressed by the group, the IGT9 judges select the group for the next round.

Following the Bharat Boys, next comes a group of ladies called ‘Swaranjali’.

Swaranjali entertains the judges and their audience with their beautiful melodic voices and secures its seat in the next round.

Next comes the magician Guru who studies judges with his scary and daring act.

Terrified but at the same time dazzled, the judges give the green signal to Guru for the next round.

Thereafter, many contestants come and go. Some succeed to impress judges while others fail to bag their place in the next round of the competition.

In the stunt yard, Divya Shinde makes an entry in a full swag on her bike, and with her daring and mindblowing bike stunts gets entry into the next round.

Moving further into the episode, comes Praveen Prajapat from Alwar, Rajasthan who is a Rajasthani folk dancer, art form Bhawai.

During his performance, Praveen shows his amazing skills of balancing by balancing mud pots over his on the pillar of glasses placed upside down.

Praveen not only balances mud pots but also a filled gas cylinder.

The judges of IGT season 9 say yes to the group for the next round.

Today’s India’s Got Talent 9 episode starts with Jump Rope Fusion Crew coming on the stage of IGT9 bringing their sporty talent into the spotlight.

Following the admission of Jump Rope Crew to the next level, comes a father-daughter duo Vikas and Shekinah who presents together their marvelous singing performance impressing the IGT9 judges.

Moving further into the episode, Rohatsh Gujjar shows his Calisthenic moves with a twist of the sword.

The dangerous act had the IGT9 judges scared and stupefied at the same time.

Next comes Dipak Rajput who magnificently performs an aerial dance act on the most beautiful song ‘Hawaaein’.

In the stunt yard, comes the ‘Magician The Pritam’ who is completely bounded with chains.

Pritam claims to come out of a blazing hut along with his assistant Nayan by getting both of them free within the time limit.

After the mind-blowing scary act of Pritam comes the Naadyog Gurukul group that presents Sufi Kathak dance performance. The group members are students of the IGT season 5 winner Ragini Makkar.

With judges giving entry to the Naadyog Gurukul to the next round, the episode ends.