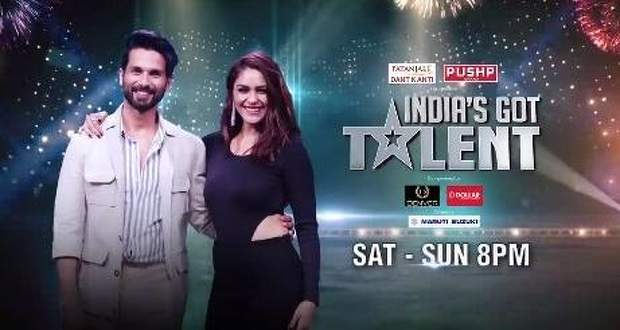 With the race for the finale getting tougher each week, India's Got Talent 9 is moving forward with its top 10 contestants this week.

The recent promo for this weekend's India's Got Talent 9 (2nd April 2022) shows the judges welcoming Shahid Kapoor and Mrunal Thakur as special guests from Jersey Movie.

Demolition Crew demolishes the sets of IGT9 with their performances and seizes the golden buzzer from the judges.

The new promo for this week’s IGT9 (2-4-2022) shows the melodious presentation by Ishita Vishwakarma in front of Abhishek Bachchan, Yami Gautam, and Nimrat Kaur from the Dasvi movie.

B.S Reddy stuns the judges and guests with his mind-blowing magic with Abhishek participating in it.

Today’s India’s Got Talent 9 episode starts with the grand welcome of the cast of the movie Dasvi, i.e, Abhishek Bachchan, Yami Gautam, and Nimrat Kaur.

The first performance is presented by the Crazy Hoppers who show their versatile choreography and styles through their formations and dance.

Arjun roasts the judges and Abhishek by revealing their class 10 mark sheets stirring up laughter in the audience.

Taking away the golden buzzer for the ninth time, Divyansh and Manuraj prove their partnership as superior in every other way.

Abhishek Bachchan and Kiran Kher join in for a dance together along with the mothers of Divyansh and Manuraj.

Warrior Squad comes up next and gets a golden buzzer for their nerve-wracking act.

Next in line, B.S Reddy comes with his magic and makes everyone speechless as he vanishes Abhishek in his act.

Ishita Vishwakarma creates magic with her melodious voice that stirs up emotions among the judges.

At Nimrat’s request, Ishita’s mother sings on the stage with her daughter and gets a golden buzzer for her miraculous voice.

Bomb fire and Demolition Crew clash with each other for a face-off with Bomb fire winning the bet.

The episode ends with a special performance by the Dasvi movie cast with Shilpa Shetty.

© Copyright tellybest.com, 2022, 2023. All Rights Reserved. Unauthorized use and/or duplication of any material from tellybest.com without written permission is strictly prohibited.
Cached Saved on: Wednesday 25th of January 2023 02:59:53 PMCached Disp on: Thursday 9th of February 2023 04:54:50 AM