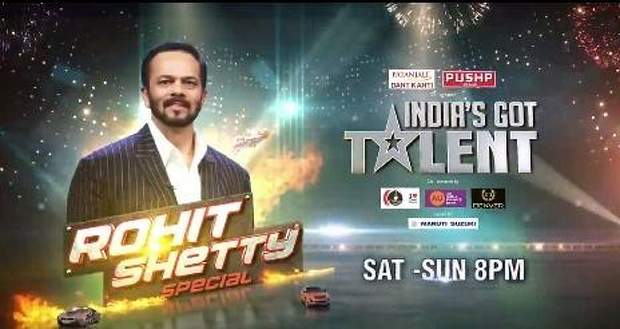 Sony TV’s India’s Got Talent (IGT9) is continuing to entertain the viewers with the grand talents of its contestants.

The recent promo of India’s Got Talent 9 for this weekend (05.03.2022, 06.03.2022) gives a sneak peek into the fun and comedy between the judges as Rohit Shetty joins them as a special guest for this weekend.

At Badshah’s request, Rohit Shetty and Shilpa Shetty re-enact the iconic comedy scene of Deepika and Shahrukh from Chennai Express.

The audience and judges burst into laughter on witnessing the hilarious chemistry between the two Shettys.

Rohit Shetty expresses his fascination from their presentation and the judges give the duo a straight golden buzzer making them safe for the week.

Further, overwhelmed by the fusion of melody and beat of Manuraj and Divyansh, Rohit Shetty announces that they will be doing the theme music along with Badshah for his upcoming movie "Circus".

The first act by crazy hopers sets the “thalaiva” mood with their entertaining dance and stunning choreography.

The mood gets romantic with Rishab Chaturvedi’s Janam Janam and Gerua cover which gets praised a lot by Rohit Shetty.

The first golden buzzer of the episode gets stolen by the Warrior Squad who shakes the whole stage with their mind-blowing stunts.

The next act rocks the whole stage with the fusion between Manuraj and Divyansh making them receive a golden buzzer instantly.

Rohit Shetty announces that Manuraj and Divyansh along with Badshah will cover the theme track for his next movie “Circus”.

The whole set of IGT screams womanhood with the mind-boggling performance by Bombfire making them receive two golden buzzers by Badshah and Shilpa.

Nitish Bharti makes the whole atmosphere overwhelmed with emotions as he presents his sand art telling the story of his father who was a policeman.

Last but not the least, Krishan and Shalini make the judges’ jaws drop on the ground with their head balancing and gymnastics act.

The episode ends with a sneak peek into the next day’s journey.

Today’s India’s Got Talent 9 episode starts with the dreamy entry of the heartthrob Madhuri Dixit and Sanjay Kapoor along with Manav Kaul.

The inauguration of performance is done by the mighty performance of the Workout Warriors.

Euphony presents an entertaining mashup of Madhuri Dixit’s songs making everyone groove with them.

Scaring the judges out of their wits, Demolition Crew rocks the stage on Madhuri Dixit’s “Nachle”.

The judges shower praises as Ishita Vishwakarma enchants the whole arena with her melody as she sings the classics, “Kahe Cher Cher Mohe” and “Ek Do Teen”.

Her amazing singing makes her gain the golden buzzer from the judges.

The next act leaves the judges in awe as B.S Reddy shocks everyone with his mind-boggling magic.

An epic record gets broken on the stage of IGT9, as Bad Salsa 2.0 breaks the record of 125 salsa spins in a minute by doing 150.

Entertainment rises up as Madhuri and Kiranji share the stage together while dancing on Devdas’ classic tracks.

However, the moment of elimination arrives, and Bad Salsa 2.0, Euphony & Workout Warriors end up at the bottom 3 by adding judges’ scores and audience votes.

With a heavy heart, the judges decide to save Bad Salsa 2.0 while Euphony and Workout Warriors get eliminated.

The episode ends with a sneak peek of next week’s episode showing Govinda and Karishma Kapoor.