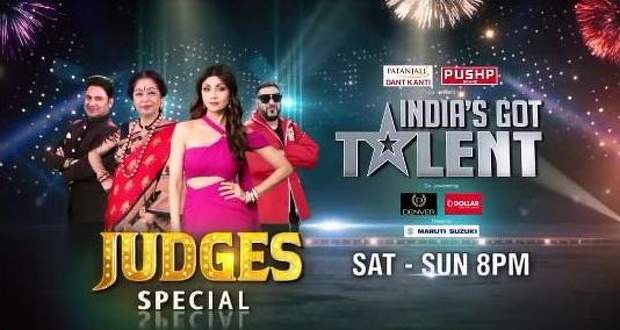 Sony TV's India’s Got Talent 9 is proceeding towards its finale soon with the top 8 contestants who are the best of the best.

The recent promo for this week’s India’s Got Talent 9 (9 April 2022) showcases the special performances by the contestants to give a tribute to the judges.

Demolition Crew gives their tribute to Shilpa Shetty through their amazing performance that highlights the special moments they had shared with her.

Shilpa Shetty gets a bit emotional on seeing their performance and thanks them for dedicating their act to her.

Another promo for this week’s IGT9 (9-4-2022) shows the magnificent duo of Divyansh and Manuraj as they blast the stage with their beats and melody.

The judges give them a golden buzzer again and are amazed by the outstanding coordination that they bring out on the stage with each other.

Today’s India’s Got Talent 9 episode starts with Arjun announcing that the top 8 contestants will dedicate their performances to the judges.

First comes up the Crazy Hoppers with their marvelous choreography and gain a golden buzzer from the judges.

Crazy Hoppers thank Arjun for his undeniable support and honor him by presenting him a grand seat.

The demolition crew breaks the stage with their power-packed performance dedicated to Shilpa Shetty and gains the golden buzzer.

Next in line, the golden duo of Divyansh and Manuraj again wins the hearts of the judges with their performance and gains the golden buzzer.

Warrior Squad puts up an interesting performance with their nerve-wracking stunts and gets a golden buzzer for their hard work.

Next up comes Bomb fire who dedicate their performance to Badshah for always supporting them in their hard times.

Ishita Vishwakarma’s performance makes Manoj Muntashir a bit emotional as he listens to the tunes close to his heart.

Rishab Chaturvedi yet again impresses the judges with his amazing singing talent.

Last comes B.S Reddy who amazes the judges with his illusionary magic.

With the moment of elimination knocking at the door, Crazy Hoppers, Demolition Crew, and Bomb fire end up in the bottom three.

The episode ends with Crazy Hoppers getting eliminated and Demolition Crew and Bomb fire joining the finalists of IGT9.

© Copyright tellybest.com, 2022, 2023. All Rights Reserved. Unauthorized use and/or duplication of any material from tellybest.com without written permission is strictly prohibited.
Cached Saved on: Monday 21st of November 2022 06:46:17 AMCached Disp on: Monday 5th of December 2022 02:20:57 PM