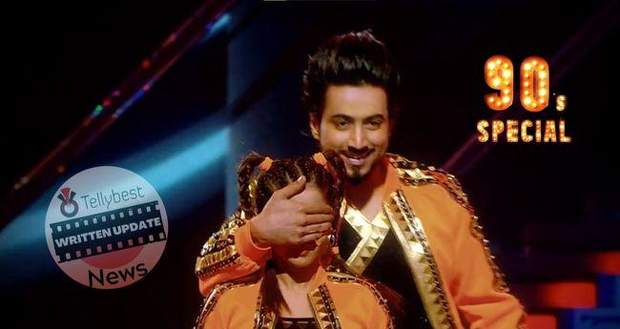 Jhalak Dikhla Ja season 10 12th November 2022 episode starts with the host Manish Paul greeting the audience and revealing that this week's theme is the 90's Special with the famous Ajay Devgan and Tabu as special guests.

Further, Manish reveals that Judge Karan Johar could not make his presence and Terence Lewis is there to fill up his absence.

First up for their performance are Gashmeer Mahajani and Choreographer Romsha Singh give a fabulous performance on the song 'Meri Pant Bhi Sexy' and earn compliments from everyone.

Special guest Ajay Devgan also calls him the Bajirao of the show as the pair gets 29 points with a golden stamp.

Manish also reveals that the pair getting the golden chair this week will be the first contestant to go into Finals.

The next performance is of Nia Sharma and Tarun Raj Nihalani who shock the audience and the judges with their modern take on the song 'Nimuda Nimuda Nimuda'.

The pair gets 28 points with the golden stamp while Nia gets a little upset at the marks.

Afterward, Manish calls Tabu and Ajay Devgan on stage to test their friendship and asks them questions about each other.

Gunjan Sinha and Tejas Varma give an amazing performance on the song 'Humaa Humaa' which impresses everyone.

The pair gets a total score of 30 along with a golden stamp.

Judge Nora Fatehi dances with Terence and stuns everyone with their chemistry and performance.

Faizal Sheikh and Choreographer Vaishnavi Patil's innovative concept of them being players inside a game gets them compliments along with 27 points and a golden stamp.

Afterward, Manish reveals that the Jhalakh family has something for the special guests and all the contestants surprise them with a special performance for them.

Colors TV’s famous celebrity dance show, Jalak Dikhla Jaa 10 is entertaining the audience this week by bringing back the 90's Special theme which will pay tribute to the evergreen retro style of the said era.

In another promo of Jhalak Dikhla Ja Season 10 (12-11-2022), Gashmeer Mahajani is also seen giving an intense performance with his elegant and fierce choreographer Romsha Singh and getting praised by the special judge Ajay Devgan.

Ajay Devgan praises Gashmeer and even tells him that he is the Bajirao Singham of the JDJ Season 10.

© Copyright tellybest.com, 2022, 2023. All Rights Reserved. Unauthorized use and/or duplication of any material from tellybest.com without written permission is strictly prohibited.
Cached Saved on: Monday 21st of November 2022 12:49:14 AMCached Disp on: Thursday 1st of December 2022 01:27:41 AM