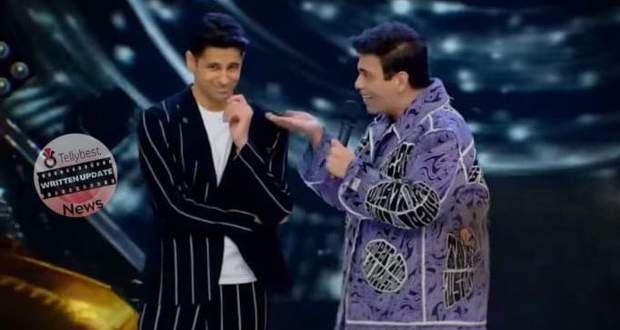 This week Sidharth Malhotra will grace the show as a special guest and promote his movie “Thank God” and this week's theme is "Desh ki Demand".

In the latest promo of Jhalak Dikhla Ja 10 (15 October 2022), Sidharth Malhotra and Nora Fatehi groove with their signature steps on the song "Manike" and puts the stage on fire with their sexy moves.

In another recent promo of Jhalak Dikhhla Ja Season 10 (15-10-2022), Karan asks Sidharth Malhotra if he is the Shershah of someone’s heart and indirectly asks him if he likes Kiara on public demand.

Later, Gashmeer with his skipper Romsha performs the Marathi songs on public demand and fills the stage with his energetic Bollywood style and Tapori dance.

After the performance, Madhuri Dixit calls his performance fantastic and whistles loudly.

As expected, Gashmeer gets a perfect score and a golden stamp on his JDJ passport.

Afterwards, Sriti comes to perform with her skipper on the song “Laal Ishq” and gives a sensual performance representing the sindoor of a married bride and uses mirrors and lighting as props and creates a beautiful effect.

Later, Amruta performs with her skipper Pratik a stunning performance on the song “Choli Ke Piche”  in a contemporary dance style.

After the performance, Madhuri praises her expressions and elegance and gives her 101 Rs as shagun.

Karan stamps a golden stamp on Amruta JDJ’s passport and gets a perfect score.

Meanwhile, Nora, Madhuri and Amruta perform and entertain the audience.

After some time, Nora and Sidharth Malhotra perform their movie song “Manike”.

Later, Paras performs with his skipper Shweta on the song “Ae Dil Hai Mushkil” in a contemporary dance style and shows great chemistry between their bodies.

Later, Nora praises his conviction and consistency in the dance.

Afterwards, Nia performs with her skipper Tarun on the demand of female bouncers on the song “Jagga Jiteeya”  and does great tricks in her jazz dance style and gives a tribute to the army men.

After the performance, Madhuri praises her performance but points out some mistakes.

Emotional Nia cries out while everyone consoles her.

In the end, the judges dance to a Bihari song and end the episode on a good note.

© Copyright tellybest.com, 2022, 2023. All Rights Reserved. Unauthorized use and/or duplication of any material from tellybest.com without written permission is strictly prohibited.
Cached Saved on: Monday 21st of November 2022 07:21:27 AMCached Disp on: Friday 9th of December 2022 05:30:54 AM