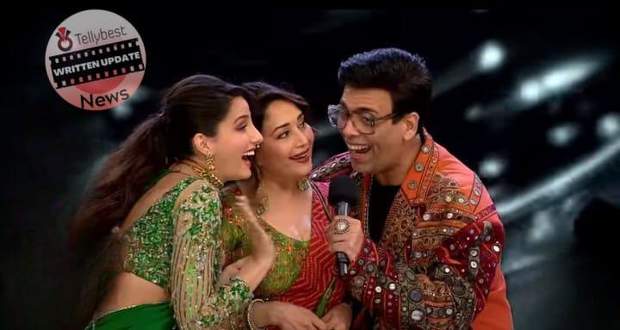 In the latest promo of Jhalak Dikhla Ja 10 (1 October 2022), Rashmika Mandanna enters the stage of JDJ to promote her upcoming movie "Goodbye" and grooves with Karan, Nora, and Madhuri Dixit on her latest song "The Hic Song".

Another recent promo of Jhalak Dikhla Ja Season 10 (01-10-2022) shows Manish entertaining the audience with his witty comeback and fun games with the Judges and holding sweet conversations with Rashmika Mandanna.

Later, Manish Paul shows a video of everyone pranking Gashmeer as they are jealous of him for winning the golden chair.

After the video, Gashmeer comes to perform with his skipper Romsha a South Indian-inspired dance theme on the legendary song “Srivalli” and imitates the story of tapori gunda who saves the heroine filmy style.

As expected from the Golden chair winner, the judges give a standing ovation to Gashmeer and Romsha.

Madhuri Dixit uses all her dialogues and praises him immensely.

Meanwhile, Karan Johar compliments the performance as the best performance of Gashmeer until now.

Afterwards, Rashmika dances with Gashmeer on her iconic song “Srivalli” and all contestants join them.

Later on, Rubina welcomes the transgender community and dedicates her performance to them.

Rubina and her skipper Sanam present the colours of Himachal Pradesh present through their folk dance on the song "Ban Than Chali".

After the performance, Madhuri Dixit praises Rubina's grace and her representation of Himachal folk dance.

Later, Manish invites Madhuri Dixit and Rashmika Mandanna onto the stage and they imitate the 90's famous film dialogue.

Both Madhuri and Rashmika entertain the audience with their dance.

Afterwards, Nia with her skipper Tarun performs a beautiful performance presenting the spiritual culture of Uttar Pradesh with Semi classical dance style on the song "Ghar More Pardesiya" and their dresses change colours with their movements.

After the performance, Madhuri praises Nia’s grace and feminine grace.

Meanwhile, Karan Johar calls her performance a visual treat and praises her determination.

After some time, Niti Taylor and her skipper Akash entertain the audience with their energetic Garba on the song “Nagada Sang Dhol”  representing the diverse culture of Gujarat.

Niti and Akash get a perfect score and get a golden stamp on their JDJ passport.

Later on, Rashmika shows Shilpa Shinde a video of her fans who show their love and support for Shilpa and assure her that she is not alone.

Meanwhile, Rashmika sits in the audience and acts as Shilpa’s family member.

Afterwards, Shilpa Shinde and her skipper Nishchal perform the legendary song “lollipop Lagelu” showing the colours of Bihar and imitating the jolly dance style of Biharis.

After the performance, Madhuri praises Shilpa’s improvement from previous performances.

Meanwhile, Nora praises her performance and advises her to work on advanced dancing techniques.

At last, Rashmika and the judges dance to “The Hic Song” and say goodbye to her.

© Copyright tellybest.com, 2022, 2023. All Rights Reserved. Unauthorized use and/or duplication of any material from tellybest.com without written permission is strictly prohibited.
Cached Saved on: Monday 21st of November 2022 05:58:05 AMCached Disp on: Friday 9th of December 2022 05:00:02 AM