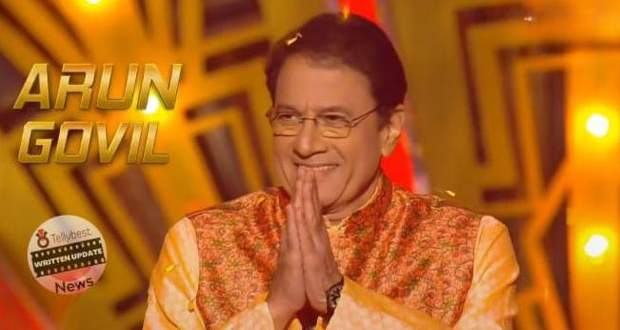 This week Arun Govil and Deepika Chikhalia will grace the show as special guests on the Diwali special week.

In the latest promo of Jhalak Dikhla Ja 10 (22 October 2022), Gunjan and Tejas perform imitating the story of the “OMG” movie and on the song “Breathless” and show a fusion of hip hop and freestyle.

In another recent promo of Jhalak Dikhla Ja Season 10 (22-10-2022), Nishant and his skipper perform a stunning performance by doing Kathakali in the classical outfit and depicting the story of the famous epic Ramayana.

Manish telling everyone about Gashmeer not performing because of his injury.

Amruta performs with her skipper Pratik presenting the Sita side of the story on the song “Teri Deewani” and does semi Indian classical dance style.

After the performance, Amruta gets a golden stamp on her JDJ passport.

Later, Deepika and Arun announce the performance of Tejas and Gunjan who perform on the song “Breathless” and stun everyone with their hip-hop style while presenting the story of Krishan Ji’s flute in the epic Ramayana.

Meanwhile, Madhuri Dixit praises their concept and compliments their cuteness.

As expected, Gunjan and Tejas get a perfect score and a golden stamp on their JDJ passport.

Afterwards, Rubina with her skipper Sanam performs the story of Draupadi and dances in a classical style on the tunes of the flute and gives beautiful expressions.

After the performance, Karan praises her acting skills and Rubina gets a golden stamp on her JDJ passport.

Afterwards, Niti Taylor and her skipper Akash perform on the song “Baahubali track” and perform a beautiful story of ShivJi and Ganga while doing Tandav dance style and using the Himalayan setting as a prop.

After the performance, Nora Fatehi praises her perfect coordination and Niti gets a golden stamp on her passport.

Later on, Nia and her skipper Tarun dance on “Vishnu Stuti” depicting the story of Kali and an asur while doing Indian classical dance form.

Meanwhile, Karan points out some mistakes and advises her to improve.

© Copyright tellybest.com, 2022, 2023. All Rights Reserved. Unauthorized use and/or duplication of any material from tellybest.com without written permission is strictly prohibited.
Cached Saved on: Monday 21st of November 2022 05:44:18 AMCached Disp on: Wednesday 7th of December 2022 03:49:50 PM