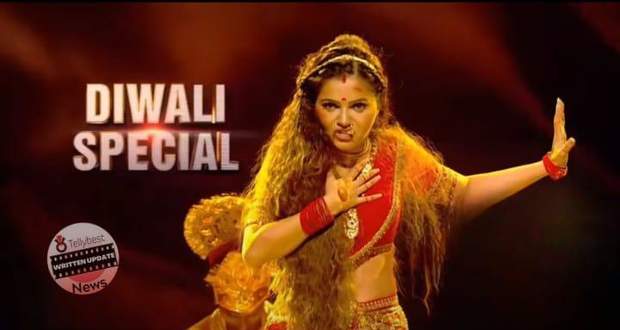 Later, Sriti Jha and her skipper Vivek dance to the song “Shree Ganesha” and depicts the story of the birth of Ganesh in their Indian classical style.

Meanwhile, Faisal and his skipper Vaishnavi perform the song “Tu Na Jaane” and win the heart of the audience with their contemporary style and the storyline of the performance and the use of diya as a prop.

Judges praise their performance and Faisal gets a golden stamp on their JDJ passport.

Afterwards, Paras and her skipper Shweta do a raasleela on the song “Woh Krishna H” and depict the story of the naughty childhood of Krishna through classical dance style.

Karan praises their effort and Paras gets a golden stamp on their JDJ passport.

Later, the judges play with some Diwali props and Madhuri Dixit wins the best judge of the week.

After some time, Ada and her skipper Shyam perform the song “Dhoom Taana” in Indian classical style and show beautiful expressions.

After the performance, the judges give some advice to Ada and ask her to improve.

Afterwards, Nishant dances with his skipper Anuradha and stuns the audience with his powerful performance on a mashup of classical songs and uses the technology to their advantage to depict the story of Ravana while doing Bharatnatyam.

The judges praise their performance and Nishant gets a golden stamp on his JDJ passport.

Later, Madhuri announces that there will be no elimination on the occasion of Diwali.

Niti and Akash win the golden chair once again.

This week Arun Govil and Deepika Chikalia will grace the show as special guests on the Diwali special week.

In the latest promo of Jhalak Dikhla Ja 10 (23 October 2022), Rubina Dilaik and her skipper Sanam give a powerful performance on the famous character of Mahabharata called Draupadi in a semi-classical dance style.

In another promo of Jhalak Dikhla Ja Season 10 (23-10-2022), Niti Taylor and her skipper Akash perform on the song “Bahubali track” and imitates Shivji and Parvati Mata with various tricks and props.