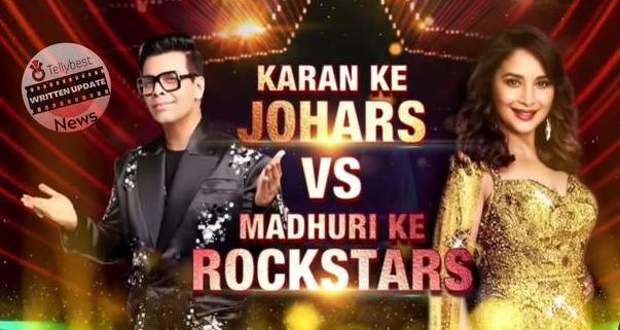 Manish announces that results will be released later and the winning teams will be eligible for winning the golden chair.

Meanwhile, Terrance replaced the seat of Nora Fatehi for this week.

Later, Rubina performs from Madhuri’s teams and performs with her skipper Sanam on the song “Babu Ji Zara Dheere Chalo” and shows a fusion of hip hop and western style dance.

Meanwhile, both teams play different types of games and entertain the audience.

Afterwards, Jhanvi Kapoor makes an appearance in the show to promote her movie “Mili”.

From Karan’s team, Faisal and his skipper perform the song “Slow Motion” and make the audience groove with great expressions and lots of tricks and lifts while doing rock n roll dance style.

Afterwards, Amruta performs with her skipper Pratik on the song “Haye Rama” and does lifts and tricks while doing freestyle.

Later, Nishant and his skipper Anuradha perform the Rajasthani folk song “Dholi Taro” and do the Bellydance with great energy and grace.

After some time, Paras performs with his skipper Shweta on the song “Kaise Hua” and does a beautiful waltz with twirls and twists and uses smoke as an accentuating factor to make their performance magical.

In the recent promo of Jhalak Dikhla Ja Season 10 (29-10-2022), both Madhuri and Karan’s teams compete by giving great performances while Karan and Madhuri taunt each other to entertain the audience.

© Copyright tellybest.com, 2022, 2023. All Rights Reserved. Unauthorized use and/or duplication of any material from tellybest.com without written permission is strictly prohibited.
Cached Saved on: Monday 21st of November 2022 01:20:56 AMCached Disp on: Wednesday 7th of December 2022 12:06:31 PM