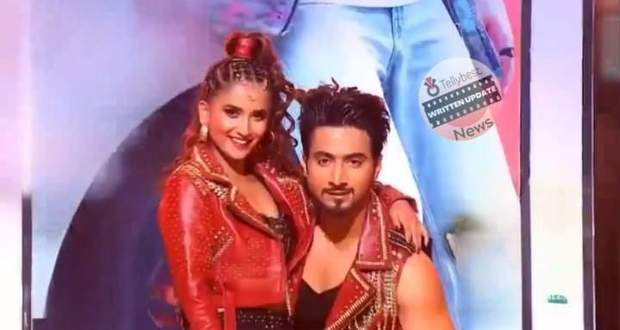 In the latest promo of Jhalak Dikhla Jaa 10 (4 September 2022), Dheeraj Dhoopar and his choreographer Sapna Singh showcase a romantic story between a pirate and princess while Karan Johar compares Dheeraj Dhoopar with Srk.

In the trending promo JDJ 10 (04-09-2022), Faisu accompanied by his skipper Vaishnavi wins the audience's heart with their performance and Faisu tells about his dream of proving his passion for dance which he couldn't do in a 30-second video.

After the performance, Manish tells everyone about Nia’s cyberbullying while Nora Fatehi praises Nia for her fierce personality.

Afterwards, Nia and Nora groove on the stage and Nora gives Nia her JDJ passport.

Later on, Zorawar and his skipper Suchitra give a comedy performance with different props of kitchen and clubs on the song “Nach Punjaban”.

After the performance, Zorawar gets praise from his family as they doubted his dance skills.

Later on, Madhuri Dixit praises Suchitra for making a chef dance like a professional dancer.

Afterwards, Faisal with her skipper Vaishnavi bangs the stage with their thundering performance on the song " Yeh H Mera Wala Dance".

After the performance, Manish praises Faisal’s passion for his work.

Faisal tells everyone about his struggle with cyberbullying.

Nora Fatehi compares her struggle for success with Faisal.

After the performance, Madhuri praises both Niti and Akash while teasing Akash for doing pranks on her.

At the same time, Niti pranks Akash by falling unconscious on the set.

Afterwards, Gunjan and Tejas with their skipper Sagar perform an energetic hip hop dance with comedic elements entertains the audience with the song “Akdi Pakdi”.

After the performance, Manish and the contestants praise Gunjan for being an undefeatable competitor.

Afterwards, the judges give the first standing ovation of the day and compliment them with their special praise dialogues.

After the performance, Paras confesses his love to Nora Fatehi.

Meanwhile, Nora and Paras groove on the stage.

Later, Madhuri praises Paras and advises him to explore his inner potential.

© Copyright tellybest.com, 2020, 2021. All Rights Reserved. Unauthorized use and/or duplication of any material from tellybest.com without written permission is strictly prohibited.
Cached Saved on: Friday 30th of September 2022 07:24:36 PMCached Disp on: Saturday 1st of October 2022 01:46:59 AM