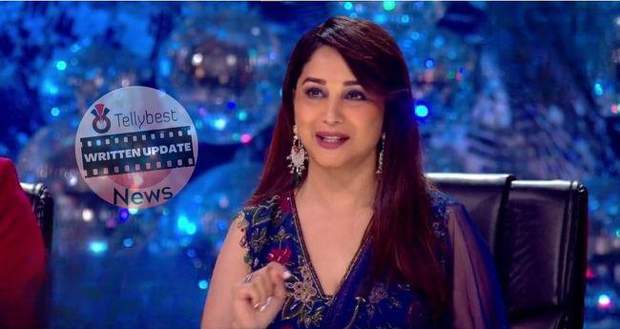 Arjun arrives on the set after Salman and Punit's performance and tells everyone that due to Adla Badli’s weak he is the new host now.

Salman then reveals that today all the participants will switch their partners with each other today.

Afterward, Nia Sharma and Vivek surprise everyone with their unique dance style on the “1 2 3 4 get on the dance floor” song.

Nora even calls it Haye Grami performance and Niya gets thirty marks and a stamp on her passport.

Karan even questions Tarun about how he is feeling now as Nia has performed with someone else and Nia tells the judges that she is emotionally connected with Tarun so she cannot wait to dance with Tarun again.

Afterward, Nora decides to dance with Salman and Punit on the Haye Garmi song and they agree.

Arjun then comes to the stage and asks Nora to perform the hook step but Salman and Punit perform it.

Meanwhile, Gunjan Sinha, Tejas Varma, and Akash impress everyone with their hip-hop dance style on the “Maar Dala” song.

As soon as the performance ends, they get a standing ovation from the judges. Punit tells them that from now on Gunjan, Tejas and Akash will be called “G.O.A.T” with thirty marks and a golden stamp on their passports.

Salam then requests Madhuri to perform with Gunjan and their duet cheers up everyone’s mood instantly.

Later, Shriti Jha and Tarun give an outstanding contemporary performance of the “Sun Sathiya” song, and their various dance lifts surprise, everyone.

After the performance ends, Madhuri praises Sriti for trying a new dance style and she gets twenty-eight marks along with a stamp on her passport.

Shriti then urges Salman to perform aerial with the prop and Salam agrees and impresses everyone with his dance to Fitoor song.

Madhuri also tells Salman that today his act reminded her of the earlier days when he used to be a contestant.

Hearing this, Salman requests Madhuri and the judge to sing his trophy and they proudly do so.

Arjun then urges the judges to come to the stage for a dance battle and Madhuri wins the title of Best Judge of the weak.

Karn even announces that it is an honor to lose against Madhuri.

Afterward, Gashmeer Mahajani and  Shweta showcase the school love story through their dance on the “Premika Ne Pyaar Se” song.

Once the performance ends, Salman praises Gashmeer for performing with ease and they get thirty marks along with a stamp on his passport.

Later, Punit orders Amruta, Gashmeer, and Nia, Nishant to stand in two different teams and urges the contestants to choose.

Arjun then tells the two teams that he will name the song and the teams have to perform the hook step.

Once the dance battle ends, Niti Taylor and Sagar surprise everyone with their hip-hop dance to Garmi song, and they get twenty-eight marks.

Niti tells Salam that she had a huge crush on him and she finds him very hot.

Colors TV’s famous celebrity dance show, Jalak Dikhla Jaa 10 is entertaining the audience this week by bringing in famous actress Sonakshi Sinha and a unique challenge for the contestants.

In the latest promo of Jhalak Dikhla Ja 10 (5 November 2022), contestant Nia Sharma and her choreographer dance to the song '1,2,3,4 get on the dance floor in a mix of different dance styles and impress the judges.

In another promo of Jhalak Dikhla Ja Season 10 (05-11-2022) Judges Nora Fateh, Punit J Pathak, and Salman Yusif Khan is seeing dancing together to the song 'Haaye Garmi' and entertaining the audience.

Puneet and Salman change the choreographers of the contestants which is a big surprise for them.

© Copyright tellybest.com, 2022, 2023. All Rights Reserved. Unauthorized use and/or duplication of any material from tellybest.com without written permission is strictly prohibited.
Cached Saved on: Monday 21st of November 2022 12:52:18 AMCached Disp on: Friday 9th of December 2022 03:55:35 AM