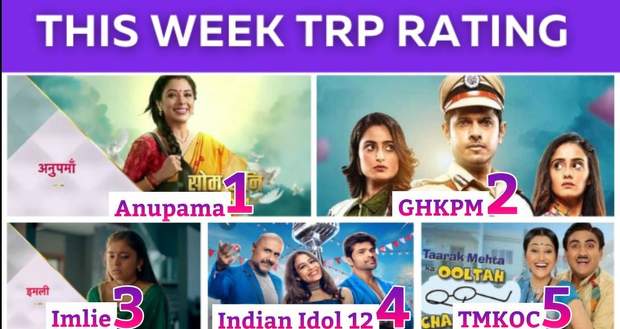 The top 5 Indian shows based on TRP Rate points are out. The rank list is based on the TRP of the number of viewers watching the serials (Highest viewership).

Imli serial is securing TRP rank in the top 5 ranks for the last few weeks and this week it gets 3rd place.

TMKOC gets 5th place as it is becoming the most-watched comedy show for many weeks now.

The table below contains the TRP rankings of the top 5 Hindi TV serials based on the BARC TRP rating. The chart shows the Urban TRP ratings of BARC.

Let's see if Anupama can still be the number 1 show (Highest TRP rated & Most watched) in India for next week as well. The toughest competitor in GHKKPM that could become the topmost rated and most popular serial.