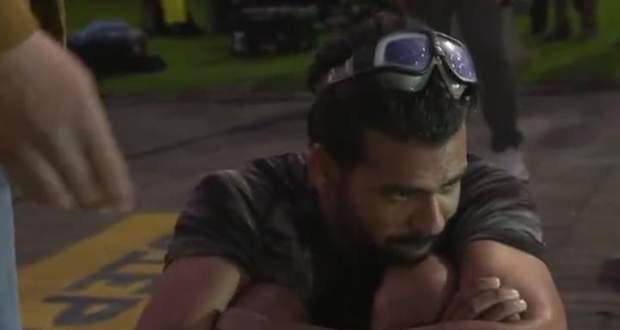 Colors TV's Khatron Ke Khiladi 11 is entertaining the audience this weekend with entertaining water stunts which are to be performed by the contestants.

Khatron Ke Khiladi 11's recent promos for this weekend (11-09-2021, 12-09-2021) episode shows the host Rohit Shetty informing the contestants they have to perform water stunts this week to save themselves from elimination nominations

Khatron Ke Khiladi 2021 latest promo shows Rohit Shetty explaining the task to the contestants that they have to go inside the water tunnel which will consist of five air gaps to seek the air through in between while cutting the net inside the tunnel to get to the other side and complete the task.

The second promo for this weekend's (11 September 2021, 12 September 2021) episode shows Vishal Singh being afraid to do the task and refuses to do it being scared of water and being claustrophobic while other contestants and Rohit Sheety try to convince him to do the stunt.

The live streaming for the latest episode is available on both Colors Television and OTT platform Voot.

Further, Rohit Shetty gives everyone a shocking surprise that there will be 2 eliminations this week. One will be on today and another tomorrow.

Rohit Shetty gives a benefit stunt in which there are 10 hens in a big cage which they have to transfer into a smaller cage. Rahul and Shweta perform the stunt after which Rohit Shetty says that he was joking about the benefit.

Later, Rohit Shetty shows some photos to the contestants and ask what is going on in their head for fun.

Further, the elimination stunt will be performed by the contestants with Fear Fanda that is Abhinav, Shweta, and Vishal. The stunt is to put the ball in the basket standing on a plank that is on a cliff. If the contestant falls from the plank the stunt will end there.

Vishal and Shweta complete the stunt but are unable to put any ball in the basket.

Abhinav falls from the plank before completing it. So, clearly, Abhinav loses the stunt and gets eliminated from Khatron Ke Khiladi 11.

starts with the introduction of every semi-finalist.
Suddenly, while talking to Rohit Shetty, Vishal falls from the stand he was standing on and hurts his leg.

Before the first stunt, Rohit Shetty makes the contestants play a game of Taboo.

The main stunt is an underwater stunt where the contestant has to be in a vacuum container full of water. As Rohit Shetty says start, the contestants have to collect all the flags attached inside it. When the contestant aborts or completes the stunt, he/she will be released to the water.
Arjun, Shweta and Varun go for the stunt. Arjun collects the most that are 4 flags and the other 2 get Fear Fanda.

Sana, Rahul, and Vishal have to do the stunt but as Vishal is injured Varun does the stunt as his proxy. All of them complete the stunt but Sana takes the highest time. So, Sana gets the Fear Fanda and joins Shweta and Varun in the elimination stunt.

In the elimination stunt, two trucks moving together and the contestant will be standing in a truck. One truck will move straight while the other might move in a zigzag way. The contestant has to jump from one truck to another and collect 20 flags on the second truck. One flag can be brought at a time.
Among Varun, Sana and Shweta . Varun collects 12 flags and Shweta collects 7 flags. Sana collects the minimum that is 3 flags and gets eliminated from Khatron Ke Khiladi 11. 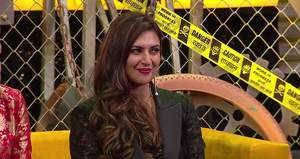 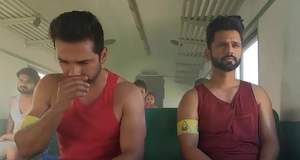 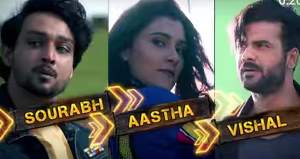