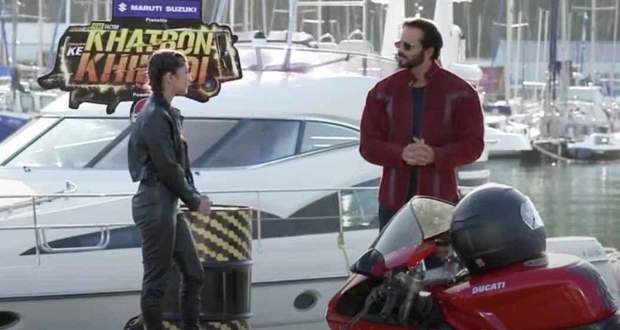 Host Rohit Shetty has brought new, risky stunts to South Africa along with the new Khatron Ke Khiladi season 12 participants. These stunts will test the contestants' skills at every turn and step.

In the latest promo of KKK 12 (10-07-22), contestant Shivangi Joshi is called to perform a task and she enters on a bike, and Rohit is impressed by her style.

She informs him that this is her real personality and she also knows how to shoot a rifle, apart from being skilled in taekwondo and boxing.

All of the participants cheer for her after she successfully performs a task under deep water.

The audience will get to see their favourite contestants performing a lot of adventurous tasks and stunts in the episode of KKK 12 on 10 July 2022.

Today’s Khatron Ke Khiladi 12 (KKK 12) episode starts with Kanika performing the new task and dodging the hyena in the cage to get to the tub, but she struggles to avoid the electric current in it.

She screams in pain after getting repeatedly shocked when Rohit comes to advise her and she completes the task.

Rohit informs them that none of them completed the task in time.

At the new stunt location, he informs that if he is left with more stars than the players in the end, then elimination will take place.

Rohit puts Rajiv’s head in a cage and puts some rats in it with him to mess with him.

Chetna and Pratik perform the task first and Chetna struggles to pull the logs out.

Rohit scolds Pratik for holding the cable next to the wall constantly, and they don’t finish the stunt in time.

Next, Tushar and Faizal go and Tushar struggles with the logs as well but they both have a fun time finishing the task and earn 2 stars.

After that, Rohit asks Sriti to walk a rope over a bed of coals and takes them to the next location.

Nishant and Sriti perform the next stunt in which they have to climb a wall and collect discs from boxes spread all over the wall, where the boxes are filled with a bunch of animals.

Nishant goes first but he is afraid to put his hand inside the box filled with snakes and starts crying.

He goes to another box and manages to get a disc out.

Sriti goes next and starts praying to reduce her fear while performing.

She keeps apologising to the animals in the box repeatedly which makes everyone laugh but she manages to collect all 4 discs.

After that, Rohit announces that two players will perform the elimination stunt and they have to decide the players among themselves.

Everyone gives the most votes to Rubina and Nishant and Rubina gets annoyed that people dislike her the most.

© Copyright tellybest.com, 2022, 2023. All Rights Reserved. Unauthorized use and/or duplication of any material from tellybest.com without written permission is strictly prohibited.
Cached Saved on: Monday 21st of November 2022 02:20:26 PMCached Disp on: Friday 2nd of December 2022 02:26:27 PM