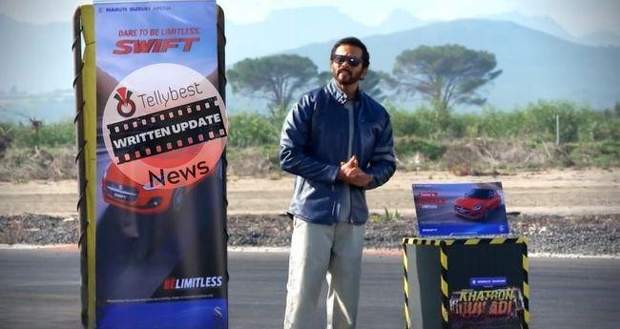 Colors TV's famous reality stunt show, Khatron Ke Khiladi is entertaining the audience this week with the Ticket to Finale week and some scary stunts.

In the latest promo of KKK12 (10 September 2022), the contestants are seen prepping for their tasks while Rohit Shetty informs them that it is the Ticket To Finale week and that the audience and the show will get their first Finalist by the end of the week.

All the contestants will be doing incredibly dangerous aerial, dynamic, and water stunts to try their hand at getting the ticket to the finale.

The audience will get to see their favorite contestants performing a lot of adventurous tasks and stunts in the twenty-first episode of Khatron Ke Khiladi 12 on (10-09-2022) at 9:30 P.M. on Colors TV.

However, Rubina Dilaik will not be participating in this week's stunt due to medical issues.

Further, Rohit shows the Ticket to Finale to the contestants and tells them that they have a chance to directly go into the finale week by becoming the performer of the week.

The contestants get excited while Rohit tells them that the losing participants will be out of the competition to win the Ticket to Finale.

For the first stunt, Rohit informs the contestants that they will have to jump from one moving car to other moving cars and collect all the flags to win the task.

The participants performing the task are Nishant and Faizu.

Nishant manages to complete the task easily with confidence while Faizu is a little stressed as he lost to Nishant in the previous dynamic task.

In the end, Faizu wins the task and becomes the first competitor in the race for winning a Ticket to Finale.

For the second stunt, it will be a partner stunt and one contestant will be tied to a chair and will have to collect the four keys from the fence with the help of a rod and get the second contestant out of the cage which will be filled with cockroaches.

However, the first contestant will get electrocuted every time the rod will touch the fence.

Since Rubina is not medically fit to compete and both Nishant and Faizu refuse to be substituted, Rubina is out of the race.

Rohit tells Mohit to do the task anyway and try to be earlier than the other teams to get a chance to win the Ticket to Finale.

In the end, Mohit cannot overcome his fear and aborts the task as he cries.

Rohit tells Mohit and Nishant that they will have to compete against each other to see who will be out of the race for Ticket to Finale.

At the third stunt location, the contestants (Nishant and Mohit) will be put in a room made of glass walls which will be slowly submerged into the pool.

The contestants will have to open the box with a key and get the cutter which will they then use to cut the circle made out of rope to get to the second section of the room and get out of the room to complete the task.

In the end, Nishant completes the task while Mohit aborts the task and gets out of the race.