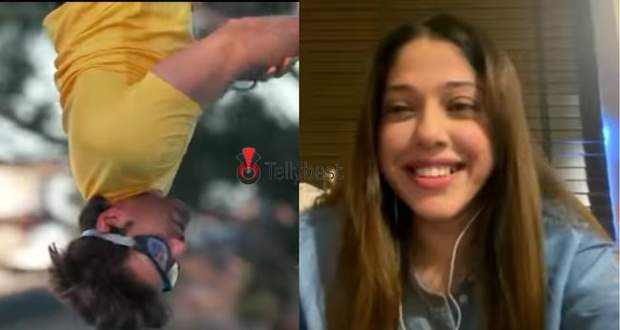 In the 13 August 2022 episode of KKK 12, Addite complaints to Rohit about taking a lot more Physio therapies these days which makes everyone laugh at the context in which it is said.

As a punishment, Rohit hangs Mohit upside down with a rope above the swimming pool and plunges him into the water with his hand tied at back.

Rohit jokes that Mohit is hurting in his heart when Mohit remarks that his hand gets hurt often.

The episode of 13 August 2022 starts with the host Rohit Shetty welcoming the contestants and ing them.

Rohit informs the contestants that an eliminated contestant is going to return to the show as Pratik Sehejpal makes his reentry.

Rohit states that they will not have any elimination today and shows them the K-medal.

Rohit brings Arjun Bijlani on video and he informs the contestants that the winner of the K-medal will get the chance to save themselves from one elimination.

In the task, the pair will be doing the stunt and one contestant will have to collect ten flags and give them to the second contestant.

The contestant will go inside a tube filled with water and will have to tie the flags.

Once, the time runs out, the vacuum will be released and the contestant will be flushed down into the pool from the tube.

Tushar and Sriti win the task and get a power locket for winning the task.

Rohit informs that for the next task, the contestant will have to walk on a platform that is on the edge of the top of the building and collect the flags which they will have to stick to the glass wall moving behind them.

Nishant and Pratik are the ones competing in the task.

However, after the six flags, the moving wall's speed will increase leading the contestant to jump from the platform.

Nishant wins the task and gets the power locket.

Rohit informs the contestants that for the next performance, the contestants will have to inside a catfish-filled tank and cut the rope net circle that is at the bottom to go to the other section of the tank in under 15 minutes.

Afterward, the contestant will have to take the Charged plaque and hand it on the hook outside and life up the Charged energy drink to indicate the completion of the task.

Mohit wins the task and gets the power locket.

© Copyright tellybest.com, 2020, 2021. All Rights Reserved. Unauthorized use and/or duplication of any material from tellybest.com without written permission is strictly prohibited.
Cached Saved on: Saturday 1st of October 2022 09:12:55 PMCached Disp on: Sunday 2nd of October 2022 12:14:24 PM