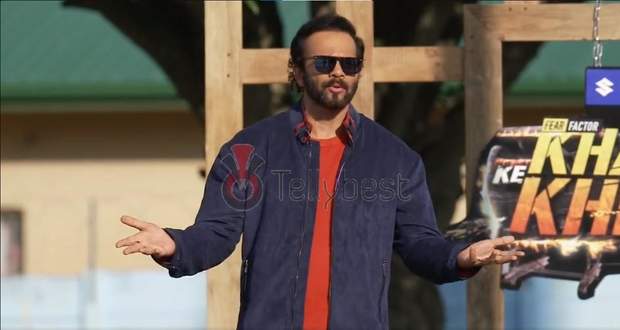 Colors TV's famous reality stunt show, Khatron Ke Khiladi is bringing back an old contestant to surprise the current contestants of the show.

In the latest promo of KKK12 (14 August 2022), the host Rohit Shetty greets the contestants at their task location and tells them that he is bringing back an eliminated contestant to give them a second chance, especially because they have promised to tell better jokes which makes the contestants laugh.

In the promo, Rohit is seen bringing out the old contestants back into the show and Pratik Sehejpal makes his entry which shocks many of the contestants.

The episode of 14 August 2022 starts with the host Rohit Shetty welcoming the contestants and reminding them that this week there won't be any eliminations.

Further, Rohit informs the six contestants without the power locket that they still have a chance to win the K-medal but with a twist.

Rohit further instructs the contestants possessing the power locket to remove one contestant of their desire from the six contestants which shocks everyone.

Nishant removes Faizu, Mohit removes Jannat, Sriti removes Pratik and, Tushar removes Rubina as a result Kanika and Rajiv are back in the race to win K-medal.

Rohit states that the winners of today's tasks will go directly into the final task to win the K-medal.

Rohit informs that the stunt is a dynamic stunt and states that the participant will be moving from one moving truck to another moving truck by walking on a rope and will have to remove 3 flags and hook 2 flags before they reach the end line.

Mohit and Tushar are the ones participating in the task.

Mohit wins the task and reaches the final task.

The second partner will have to make a hanger of Nimbu-Mirchi (Lemon and Chili) and give it to the first contestant who will have to hang it on the hook.

Kanika and Nishant win the task and reach the final task for K-medal.

At the last task location, Sriti shocks everyone with her skills as she dances with fire-ignited rods.

Rohit informs the contestants that it's a car stunt and tells them that they will have to drive in the lane indicated by the red traffic cones and will have to hit the specific poles while putting the car in reverse mode.

However, each time a red traffic cone is touched by the car, a 10-second penalty will be added after which the contestants get shocked when they learn that the pole falling will create a small blast each time.

As for Kanika, her driving impresses everyone as she has said that she doesn't know how to drive.

Lastly, Nishant also manages to complete his task even though he doesn't know how to drive properly.

Kanika wins the task and gets the K-medal giving her the advantage to back out of the task or any elimination at any chance in the future for one time.

© Copyright tellybest.com, 2020, 2021. All Rights Reserved. Unauthorized use and/or duplication of any material from tellybest.com without written permission is strictly prohibited.
Cached Saved on: Saturday 1st of October 2022 10:27:02 PMCached Disp on: Sunday 2nd of October 2022 12:06:13 PM