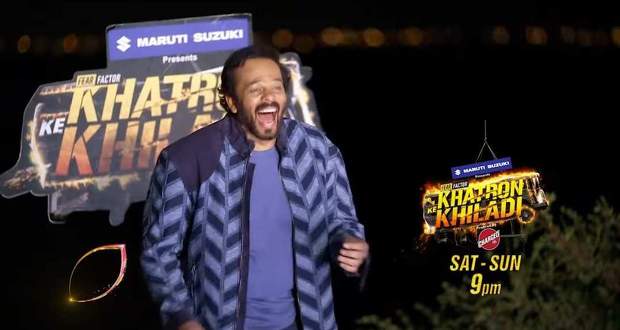 Along with the new Khatron Ke Khiladi season 12 contestants, host Rohit Shetty introduced brand-new, deadly stunts to South Africa. At each turn and stride, these feats will put the competitors' talents to the test.

In the latest promo of KKK 12 (17-07-22), Rohit invites Chetna Pande to perform a task in which her head is trapped in a glass covering, and a lot of insects are put inside it.

While she tries to perform the task, she freaks out and starts screaming due to the insects crawling all over her face.

The audience will get to see their favourite contestants performing a lot of adventurous tasks and stunts in the episode of Khatron Ke Khiladi 12 on 17 July 2022.

Today's episode starts with a new stunt in which there are three bones in a cage that the contestants need to get and put in bowls outside the cage.

Kanika goes first and the dogs bite her and try to drag her away so she screams in pain.

She struggles to even walk and the dog wouldn’t stop biting her but she doesn’t give up and finishes the task.

Aneri goes next and says that dogs are her biggest fear but finishes the stunt as well.

After that, Sriti goes and finishes the task as well.

Rohit tells them that Kanika finished the task in the lowest time and Sriti and Aneri would get the fear fanda.

After that, Rohit brings out a chameleon and asks Rubina to kiss it to mess with her.

At the next stunt location, Rajiv tells Rohit he’s written a letter for him and reads it out to him which makes everyone laugh.

After that, Rohit says that except for Faizal, those who have the fear fanda will be performing the next stunt.

He brings out earthworms, cockroaches, and snails and says that partners will perform this stunt and one of them has to put a roach in their mouth.

After that, they need to memorise the digits on the screen and enter that as a code.

Then the other person will put a snail in their mouth and repeat this.

In the last step, both partners will put earthworms in their mouths and repeat to end the stunt.

Aneri and Shivangi go first but keep getting the last code wrong.

However, they manage to finish the task.

Rajiv and Chetna go next and also manage to complete the task.

Chetna starts crying after one of the worms goes down her throat.

Sriti and Pratik perform next and Sriti starts dancing while holding the roaches in her mouth to distract herself.

Rohit tells them that Pratik and Sriti performed the fastest.

He also says that Faizal, Shivangi and Aneri would be performing the elimination task next and one of them will go home.

In the elimination stunt, there is a round caged bed which has sections in it and the player’s body parts will be in different sections.

They need to collect number cards by opening bolts from there and read the codes on the screen and enter those on either side within 8 minutes.

Meanwhile, roaches, snakes and crabs would be put on them.

Faizal goes first and enters the codes in the wrong order initially but finishes the stunt.

Shivangi is the next one to perform and she struggles to get the cards but she also finishes the task.

Next, Aneri goes to perform but doesn't finish the task in time.

Rohit tells them that Aneri is eliminated today.