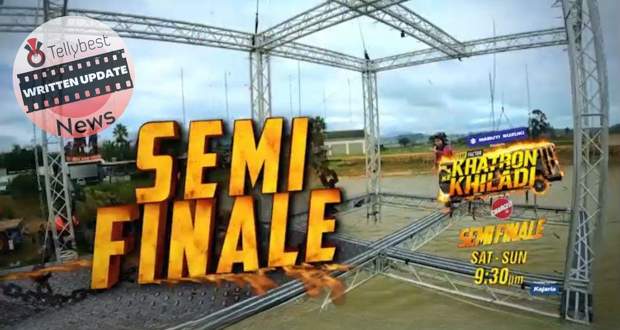 Colors TV's famous reality stunt show, Khatron Ke Khiladi has reached its semi-finals and is going to entertain the audience with its dangerous and thrilling stunts and comedy.

In the latest promo of KKK12 (18 September 2022), we see Rubina prepping herself mentally to do the dynamic stunt which involves her driving a car and smashing it with four other cars as a part of the semi-finale stunt.

All the contestants are seen anxiously looking on as Rubina gets into the car and drives the speed at full speed and completes her task of going through all four cars successfully.

All the contestants will be doing incredibly dangerous aerial, dynamic, and water stunts to try their hand at reaching the finales.

The audience will get to see their favorite contestants performing a lot of adventurous tasks and stunts in the twenty-fourth episode of Khatron Ke Khiladi 12 on (18-09-2022) at 9:30 P.M. on Colors TV.

The episode of 18 September 2022 starts with Rohit Shetty greeting the contestants and telling them to get ready for their last chance to get into the finale.

Mohit and Nishant are the participating contestants while others cheer them on.

Nishant loses while Mohit wins and gets to remove his Fear Fanda.

Rohit tells the contestants (Kanika and Rajiv) that they will be driving a car and will have to tilt them using a ramp on the truck ahead of the car and remove the ten flags attached to it to win the task.

Rajiv removes eight flags while Kanika removes ten and gets to remove her Fear Fanda.

At the third task location, Rohit informs the contestants and the audience that Nishant is unable to perform any task due to his health deteriorating and shows them a video message by Nishant.

As a result, Rohit informs that they will have to, unfortunately, eliminate Nishant.

However, Rajiv will still have to perform a task but will have to pass the bar set by one of the other contestants.

Rohit sifts through the chits and pulls out Rubina's name confirming that she will do the task first.

For the task, Rohit tells the contestants that they will have to crawl a pole from the edge of the building to collect the three flags attached and then jump from the tiny round platform into the air to collect the fourth flag and complete the task.

However, Rajiv is unable to complete the task and also gets eliminated but Rohit decides to keep him in the finale for his humor.

As a result. both Rajiv and Nishant are eliminated from the semi-finale.

At the fourth task location, Rohit informs the six contestants that there will be only five contestants in the finale week and that there is still a task left.

Rohit informs the contestants (Faizu, Tushar, and Jannat) that they will have to climb a coconut tree and collect ten coconuts each one by one and jump in the pool to put the coconuts in the basket.

Faizu goes first and due to the weather turning bad, Faizu has many problems and starts feeling exhausted in the middle of the task.

© Copyright tellybest.com, 2022, 2023. All Rights Reserved. Unauthorized use and/or duplication of any material from tellybest.com without written permission is strictly prohibited.
Cached Saved on: Wednesday 25th of January 2023 10:20:22 AMCached Disp on: Monday 6th of February 2023 06:23:44 PM