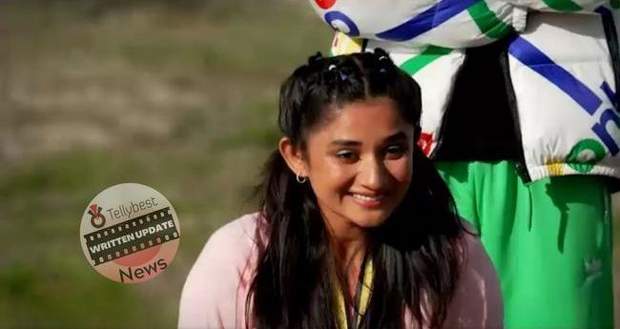 In the latest promo of KKK12 (20 August 2022), the host Rohit Shetty greets the contestants and informs them that this week is going to be special as they are going to have some special people encourage the current contestants.

In the promo, Kanika is seen being scolded by her mother for the cheating she did earlier in the show while the other contestants and Rohit laughs in enjoyment.

Further, Kanika states that she will surely give her best in the next task and will not do anything that is unfair to the other contestants.

The episode of 20 August 2022 starts with the host Rohit Shetty welcoming the contestants and telling them that their mothers have something to tell them.

Sriti's mother greets her on a video call and calls her brave after which Tushar's mother tells him to not get angry too much and take care of his health.

Kanika's mother teases her by telling her to not speak too much and listen to what Rohit Sir has to tell them.

Further, Rohit informs the contestants that this week is dedicated to mothers and states that the next task will be a partner task.

Rohit informs the contestants that they will be both on a platform on opposite sides of a moving truck.

One contestant will hold up the second contestant with the connected rope while the other will collect the flags.

Kanika-Rajiv, Jannat-Faizu, and Mohit-Pratik will be the ones participating and only one pair will be safe while the remaining two will get Fear Fanda.

Kanika gets scared at first but completes the task after getting encouraged by Rohit.

Jannat-Faizu win the task while Mohit, Pratik, Kanika, and Rajiv get the Fear Fanda.

At the next task location, Rubina's mother is shown telling Rubina that she is proud of her and encouraging her.

Rohit informs the contestant that the participating contestants will be paired up and in the stunt, one contestant will be stuck in a box filled with reptiles while the other will have to transfer marbles from the first box to a key box and get the keys which the first contestant will use to unlock the four locks in the box.

Nishant-Sriti manage to complete the task very smoothly while Rubina-Tushar worry if they can beat their speed.

In the end, Tushar-Rubina win the task while Nishant and Sriti get to wear Fear Fanda.

At the next stunt location, the contestants and Rohit get a laughter overdose as they see each other's childhood baby pictures.

Introducing the stunt, Rohit informs the contestants in elimination that they will have to go through a tunnel which will have water spraying at them with full pressure and will have to collect all the flags to complete the task and get out of elimination.

Pratik wins the task and gets to remove his Fear Fanda.

Afterward, Rajiv gets to speak to his mother who also teases him by doing a poem in broken Hindi language which makes the contestants laugh.

© Copyright tellybest.com, 2020, 2021. All Rights Reserved. Unauthorized use and/or duplication of any material from tellybest.com without written permission is strictly prohibited.
Cached Saved on: Saturday 1st of October 2022 11:50:42 PM