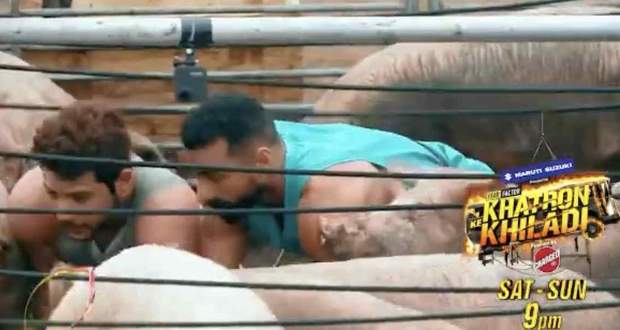 Host Rohit Shetty has brought new, risky stunts to South Africa along with the new Khatron Ke Khiladi season 12 participants. These stunts will test the contestants' skills at every turn and step.

They have to perform the task inside a pig pen and the pigs end up biting both Tushar and Nishant, which hurts them badly.

The audience will get to see their favourite contestants performing a lot of adventurous tasks and stunts in the episode of Khatron Ke Khiladi 12 on 23 July 2022.

The episode of 23 July 2022 starts with host Rohit Shetty informing the participants that this week they are going to be performing in pairs as it's partner week.

Rohit further picks the chits from the fish bowl and takes out seven names of the contestants who get the privilege to choose their partners.

Rohit reveals that the next stunt is a car stunt and the pairs performing it will be Jannat-Pratik and Sriti-Mohit.

Jannat-Pratik are the first ones to perform and miss the first few barrels but manages to hit the next barrels.

However, Mohit-Sriti manage to outperform them and win the task.

Jannat and Pratik get Fear Fanda.

Later, Rajiv pranks Pratik and makes him think that he is getting mobbed by gangsters scaring him.

At the next task location, Rohit makes Rajiv-Chetna and Faizu-Shivani do the knot task for an advantage but they both fail to win and get the advantage.

Afterward, Rohit instructs them that for their next task, they will have to coordinate and bring the rod from one end to the other end while trying to not touch the main rod and get electrocuted.

The pair completing the task within less time will win.

Halfway through the task, Shivani gets an asthma attack making them stop their task halfway which makes Rajiv scared to do the task next.

Rohit informs Rajiv-Chetna that they will have to go past the mark where Shivani-Faizu reached within 13 minutes to win the task.

This gives Rajiv-Chetna an advantage and they win the task while Shiva cries feeling guilty for putting Faizu in the elimination.

Rohit consoles Shivani after which Faizu and Shivani get Fear Fanda.

At the next task site, Rohit makes Rubina hold and kiss an anaconda while she has to sing which amuses all the other contestants.

For the last task of the episode, the pairs Kanika-Rubina and Nishant-Tushar will have to hold a lemon in their mouths and bring it to the other box by crawling through the pig pen.

The pair getting the most lemons within 15 minutes will win.

The pigs get into a fight while Kanika-Rubina are performing which scares both of them very much but the other contestants get amused by it.

Nishant-Tushar get inside the pig pen for their task performance and Nishant gets bitten by the fighting pigs which also scares everyone.

The time is paused and Nishant decides to continue the task after being aided for the bites.

In the end, Nishant-Tushar win the task even after the penalty while Kanika-Rubina get Fear Fanda.

© Copyright tellybest.com, 2020, 2021. All Rights Reserved. Unauthorized use and/or duplication of any material from tellybest.com without written permission is strictly prohibited.
Cached Saved on: Saturday 1st of October 2022 10:14:36 PMCached Disp on: Thursday 6th of October 2022 04:06:22 PM