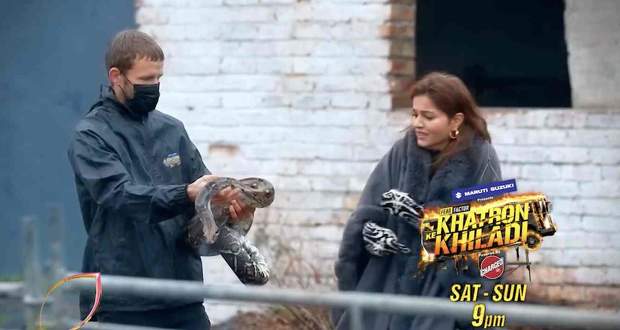 Nishant says that he saw Abhinav (Rubina’s husband) in his dreams and he was shaped like a snake.

Rohit brings out a huge snake and the contestants start singing the song ‘Jumma Chumma de de’ and ask Rubina to give a kiss to the snake Abhinav.

The audience will get to see their favourite contestants performing a lot of adventurous tasks and stunts in the episode of Khatron Ke Khiladi 12 on 24 July 2022.

Rohit further asks the contestants in elimination asking if they think their partners are strong and reveals that the partners of the pair will be competing against each other.

Further, Rohit tells Kanika-Rubina that they will be put inside a cage with 10 Ostriches and they will have to bring their five Ostriches into the cage.

However, they get scared once they learn that the Ostriches had broken the set and gone wild when they tried to use Ostriches in the past season.

Rubina manages to get one Ostrich inside but forgets to lock the cage and the Ostrich runs away.

Meanwhile, Kanika has already caged 3 Ostriches but has to remove them since they are not of odd numbers.

Lastly, Rubina manages to win and gets to remove her Fear Fanda.

However, Kanika gets emotional as she got confused with the odd and even numbers while Rubina brings up the issue that she saw Kanika with a phone.

When Rubina see the search history on the phone, she saw searches like how to tame an ostrich and how to handle an ostrich which makes Rubina lose her trust and makes her disappointed.

Kanika refuses to do such a thing while an argument ensues between them.

However, Rohit reveals that Rubina only spoke when asked as she didn't want to create a scene.

Later, Pratik questions Rubina why she spoke when she already won the task while others berate him for scolding Rubina.

Meanwhile, Kanika tries to justify her actions to Chetna and accepts that she had used the search engine on the phone.

At the next task location, Rohit informs the contestants that they will be submerged in a cage and will have to remove the ring locks to open the door and get out of the cage.

The contestant completing the task first will win.

First up are Pratik-Jannat and Rohit warns Pratik to not irritate the stunt team with his questions.

Pratik taps out of the task as he has difficulty breathing while Jannat manages to complete the task in the middle of a storm and wins the task.

Jannat gets to remove her Fear Fanda.

Shivangi and Faizu perform the task next while Faizu manages to complete the task first and wins.

Faizu gets to remove his Fear Fanda.

Further, Rohit states that now Pratik, Shivangi and Kanika will perform the final elimination task and will find out who will get eliminated.

At the last task location, Rohit informs the contestants that they will be trapped with reptiles inside a rotating box and will have to find the correct three keys from the six keys and open the light box.

Shivangi goes first while she feels a little bit down due to her health not being with her for the time being.

Rohit gives Shivangi an option to get Rajiv as the substitute but she refuses and manages to complete the task.

At the end of the task, Rohit states the timings and reveals that Shivangi has taken the longest.

Shivangi gets eliminated and leaves the show after bidding goodbye.

© Copyright tellybest.com, 2022, 2023. All Rights Reserved. Unauthorized use and/or duplication of any material from tellybest.com without written permission is strictly prohibited.
Cached Saved on: Thursday 26th of January 2023 04:36:48 AMCached Disp on: Sunday 5th of February 2023 12:51:45 PM