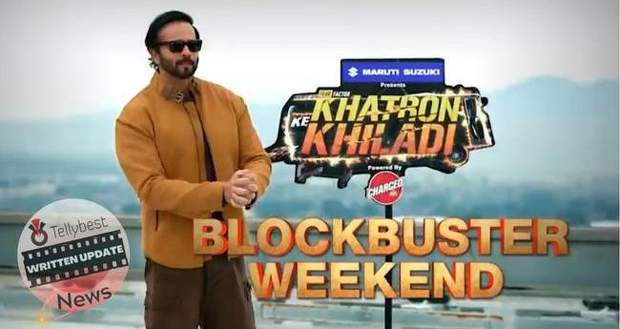 Colors TV's famous reality stunt show, Khatron Ke Khiladi is entertaining the audience this week with a high of action, drama, and romance between the contestants.

In the promo (27-08-2022), Faizu and Jannat are seen teasing each other and having romantic moments as the other contestants laugh and holler to cheer them up and tease them.

The audience will get to see their favorite contestants performing a lot of adventurous tasks and stunts in the seventeenth episode of Khatron Ke Khiladi 12 on 27 August 22 at 9 P.M. on Colors TV.

The episode of 27 August 2022 starts with the host Rohit Shetty welcoming the contestants informing them that this week will be dedicated to all the action, drama, and other things that make anything a blockbuster.

Rajiv reveals that he wishes to audition for one of Rohit Shetty's movies and gets tasted by being asked to translate English idioms into Hindi idioms.

Rohit informs the contestants that it is a rescue task and that they will have to rescue Kanika.

The contestants performing will be Pratik and Nishant.

Pratik manages to get a head start due to his speedy skills and gets to go inside the main room to save Kanika.

Nishant fails the task and has to wear the Fear Fanda.

At the second task location, Rubina is tasked to kiss an iguana which scares her but amuses other contestants.

Rohit tells the contestants that this is a dynamic stunt and tells them that two contestants will be riding the truck while their partners will be in the coffins.

The contestants from the truck will have to fight the attackers and save their partners from the coffins and do a sequence of actions ending with getting rescued by a chopper.

Rubina-Tushar and Mohit-Rajiv are the pairs tasked to participate in the second task.

Rubina and Tushar manage to complete the task first and win.

Mohit and Rajiv fail the task and have to wear the Fear Fanda.

Rohit gives Bollywood characters to the contestants and tells them to say one iconic line from the characters.

For the third stunt, Rohit tells the contestants that their main aim is to steal the golden egg and that they will not know the process of how to get to the egg.

Rohit will be seated in a monitor room and will inform the participating contestants Jannat and Faizu through a walkie-talkie and will guide them towards the golden egg.

Jannat goes first and even after many hurdles, she manages to complete the task while the contestants try to cheer her up.

Meanwhile, Faizu completes the task fairly easily but deals her time in the electric shock sections and loses to Jannat.

Faizu loses and has to wear the Fear Fanda.

However, to cheer up Jannat who is a little bit scared, Rohit suggests the contestants play dumb charades.

Pratik gets splashed with cold water each time he fails to convey the name of the movie and becomes a topic of amusement for the contestants and Rohit.