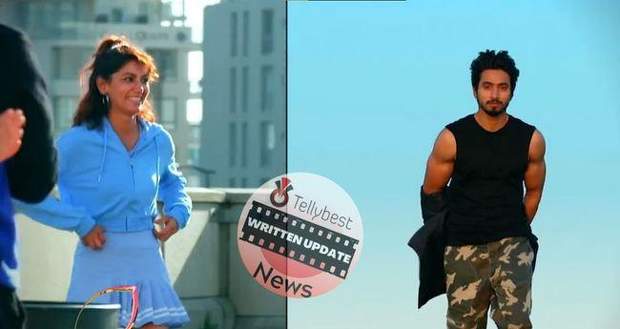 In the latest promo of KKK12 (3 September 2022), Faizu and Sriti are seen reentering the show and giving their best to prove that they deserve a second chance and will try to keep their place and not end up in elimination.

Sriti is seen telling that she will work hard to prove that she deserves to be back and will use this chance to win the show.

The audience will get to see their favorite contestants performing a lot of adventurous tasks and stunts in the nineteenth episode of Khatron Ke Khiladi 12 on (03-09-2022) at 9:30 P.M. on Colors TV.

The episode of 3 September 2022 starts with Rohit Shetty greeting the contestants and them asking Rohit about the key to the treasure box they found in the hotel.

Later, Rohit opens the treasure box to reveal eight Fear Fanda and makes each contestant wear them while revealing that it is Fear Fanda week.

Rohit informs that the best performer for each stunt will get to remove their Fear Fanda while the others will continue on.

For the first task, Rohit informs the contestants that they will be seated in a room filled with tear gas, and the last performer to come out will win and get to remove their Fear Fanda.

All the eight contestants go into the room and Pratik is the first one to come out followed by Kanika and Rajiv.

Rubina starts destroying the books to distract herself while Mohit and Jannat leave the room.

Rubina is unable to bear the tear gas anymore and leaves the room while Nishant and Tushar are the only ones sitting in the room.

Tushar is unable to see Nishant in pain and gets up which makes Nishant the winner of the task.

Nishant gets to remove his Fear Fanda.

At the second stunt location, Rohit asks the contestants whom they think would stay in elimination till the end and tells them to smash the mentioned contestant's face into a pie.

Tushar wins the task and gets to remove his Fear Fanda.

For the third stunt, the contestants are informed that their faces will be put in a glass box containing various reptiles and will have open its side with screws and other tools to win the task.

Along with this, the contestants will have to go from the start line to the finish line.

Jannat wins the task and gets to remove her Fear Fanda.

Rohit tells the contestants that they will be standing on a platform and will have to hold onto one of the ropes which will pad line them towards their next mark.

All the contestants get ready while Pratik states that he wants to abort the task.

© Copyright tellybest.com, 2022, 2023. All Rights Reserved. Unauthorized use and/or duplication of any material from tellybest.com without written permission is strictly prohibited.
Cached Saved on: Wednesday 25th of January 2023 03:17:12 PMCached Disp on: Monday 6th of February 2023 07:13:46 PM