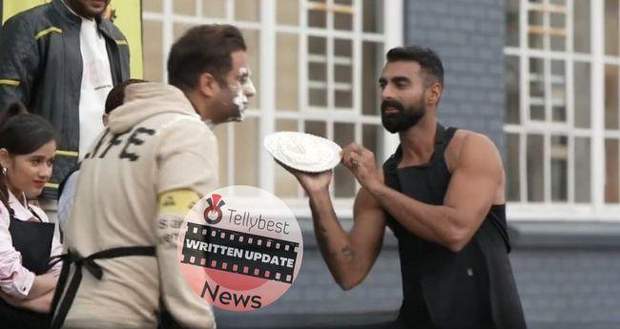 Colors TV's famous reality stunt show, Khatron Ke Khiladi is entertaining the audience this week with a fun activity for the contestants.

In the latest promo of KKK12 (4 September 2022), Rohit Shetty tells the contestants to choose one contestant whom they think will get the fear fanda and smash the pie into their faces.

Most of the contestants smash the pie onto Rajiv's face while Jannat does comedy by smashing her own face with the pie.

The audience will get to see their favorite contestants performing a lot of adventurous tasks and stunts in the twentieth episode of Khatron Ke Khiladi 12 on (04-09-2022) at 9:30 P.M. on Colors TV.

The episode of 4 September 2022 starts with Rohit Shetty getting the contestants ready for the previous task which is going to be continued from now on.

Pratik aborts the task while the remaining four contestants get ready for the task.

At the end of the task, Mohit wins the task and gets to remove his Fear Fanda.

Rohit scolds Pratik and ridicules him for not completing even one task.

At the second task location, Rohit informs the remaining four contestants that it is a dynamic stunt and that they will have to swim underwater and collect as much as gold possible from the submerged water in under 15 minutes.

The contestant with the most amount of gold will win while the remaining three will go into the elimination task.

Pratik refuses to even move from the deck while Rajiv keeps collecting gold coin bags.

Rubina and Kanika get scared to dive underwater but manage to start getting gold after getting some guidance from Rohit.

Rajiv wins the task and gets to remove his Fear Fanda.

Rohit asks the contestants whom they think is deserving of staying out of Rubina, Kanika, and Pratik.

Most of the contestants vote for Rubina while Nishant takes Pratik's name which is disapproved by everyone, including Pratik himself.

In the task, the contestants will be on a mid-air platform and will have to jump on three yellow cars while collecting the back.

Rubina confidently performs the task and completes it while Pratik aborts it.

Pratik gets eliminated and leaves the show.

At the task location, Sriti Jha also comes and shocks the contestants while Rohit informs them that the task will only be between Sriti and Faizu and the winner will get to stay.

In the task, the contestant will be stood on a metal frame on the side of the building and will have to collect as many flags attached to the wall to win the task.

Faizu wins the task and gets a re-entry into the show while Sriti gets satisfied with her loss and bids them goodbye.

© Copyright tellybest.com, 2022, 2023. All Rights Reserved. Unauthorized use and/or duplication of any material from tellybest.com without written permission is strictly prohibited.
Cached Saved on: Wednesday 25th of January 2023 06:12:35 PMCached Disp on: Monday 6th of February 2023 07:13:03 PM