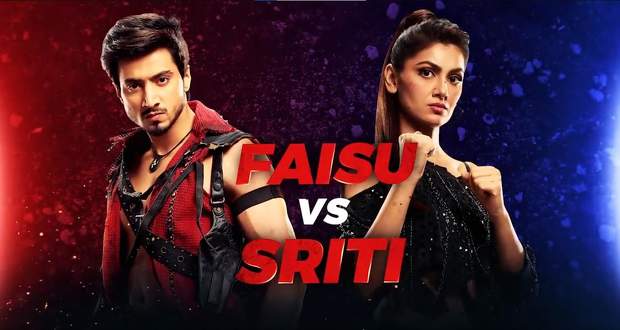 In the latest promo of KKK 12 (06-08-22), contestants Sriti Jha and Faisal get into a war of words and rap against each other while the remaining contestants find humor in it.

Faizal comments on Sriti being quiet and asks her if her mouth is filled with Paan saying that the country wants to know.

However, Sriti also gives a firing reply telling him to learn something from her as even her good morning posts get more like that his posts.

The audience will get to see their favorite contestants performing various land and water stunts in the episode of Khatron Ke Khiladi 12 on 06 August 2022.

The episode of 6 August 2022 starts with Host Rohit Shetty greeting all the contestants.

Rohit informs the contestants that they will be doing the next task from captaincy from the two teams that were formed in the previous episode.

The contestants will all be put on a platform propelling in the air which will till from one side to the other.

The last contestant to hold onto the rope from each team will become captain while the contestant holding on till the end will get 10 points. Both the captains will also be free from elimination this week.

Team Yellow gets 10 points as Tushar manages to hold on to the rope till the end.

Meanwhile, Rubina gets injured and is sent to the hospital.

At the second location, Rohit informs the contestants that three contestants from each team will participate. In the task, each contestant will have to pass the metal key from two boxes (six boxes for each team).

Faizu, Jannat, and Kanika participate from Team Red while Nishant, Sriti, and Chetna are the participating contestants from Team Yellow.

Team Red completes till box five but is unable to complete the task due to time out while Team Red fails to go past the fifth box.

Rohit informs the teams that for the next stunt, one participant from each team will have to guess the animals put on their face and will be given three guesses. The team with the most correct guesses will win.

Both the teams come to a time but based on timings, Team Yellow wins the task and reaches 20 points in total.

Rohit states that four contestants from each team will be participating.

In the stunt, all four contestants will be propelled in the air on glass platforms of 6 pairs of glass panels (12 boxes in total0 with one flag attached to each box.

However, from the pair of glass panels, one is strong while the other will crack and the contestant will into the river.

Rajiv is not chosen from Team Yellow while Rubina is excluded from Team Red as she's still unable to participate due to her medical injury.

Team Red wins the task and gains 10 points reaching a total of 20 points.

© Copyright tellybest.com, 2022, 2023. All Rights Reserved. Unauthorized use and/or duplication of any material from tellybest.com without written permission is strictly prohibited.
Cached Saved on: Wednesday 25th of January 2023 11:34:52 AMCached Disp on: Thursday 9th of February 2023 07:36:29 AM