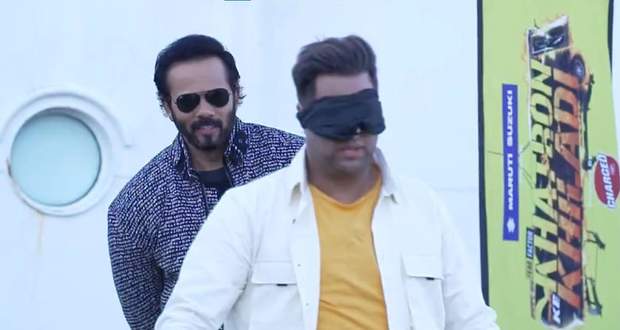 Colors TV's famous reality show, Khatron Ke Khiladi season 12 is going to show the contestants having comedic acts with elimination at the end.

In the latest promo of KKK 12 (07-08-22), contestant Rajiv Adatia is told to walk blindfolded on a mouse trap laced route barefoot to not see if he will go first for the elimination task or not.

The contestants try to give him directions while Rajiv skillfully passes the route impressing everyone, including Host Rohit Shetty.

The audience will get to see their favorite participants doing amazing tasks either in teams or individually in the episode of Khatron Ke Khiladi 12 on 07 August 2022.

The episode of 7 August 2022 starts with both Team Yellow and Team Red jogging and encouraging themselves to do better.

Rohit Shetty greets the contestants and welcomes Rubina to the task location but tells her that she cannot perform as instructed by the doctors.

Rohit Shetty informs the teams that three contestants will be participating in each team.

In the task, the contestants will have to jump from one propelling bar to another which will be fixed in a circular motion and, collect all the flags.

From Team Yellow, Tushar, Chetna, and Sriti while from Team Red, Mohit, Faizu, and Kanika will participate.

Team Red goes first and members of Team Yellow start showering them with a high-pressure water pump and manage to make all the three contestants fall without collecting any flags.

However, Tushar from Team Yellow manages to collect one flag and wins the task.

Team Yellow gains 10 points coming to a total of 30 points.

Rohit informs the contestants that two participants will compete on each team.

Giving details about the task, Rohit informs that both the contestants will be put in compartments filled with animals and insects opposite each other.

Later, the whole team Red put pressure on Rubina to finish the task at any cost and to not put them in elimination.

Rubina and Jannat complete the task fairly quickly while Rajiv aborts the task from Team Yellow.

Team Red gains 10 points coming to a total of 30 points.

Rohit Shetty gets angry at Rajiv for aborting without even trying to do the task.

Rohit tells the captains Mohit and Tushar to select one person whom they are going to put in the elimination task and that they can't select themselves.

Even Team Yellow doesn't like Mohit's decision and tells him that he should have chosen Kanika which causes an argument.

Rohit informs the participating contestants that they will be put in a net barrel underwater and will have to collect the 10 flags in a minimum time.

Rubina manages to complete the task while the contestants doubt her speed.

However, Chetna collects 6 flags and aborts the mission.

Chetna fails to complete the elimination task and gets eliminated.

All the contestants bid her goodbye after which Rohit informs her that the team week has ended. 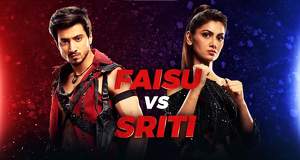 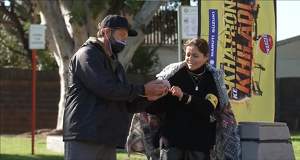 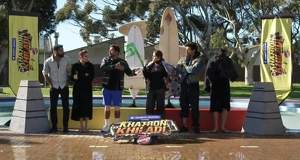