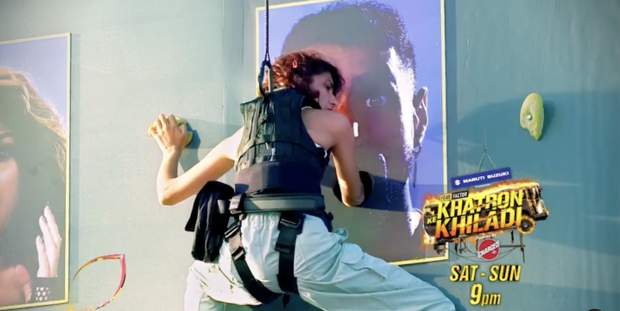 The 12th season of Kahtron Ke Khiladi, India's biggest challenging and adventurous reality programme, has debuted with Bollywood producer and filmmaker Rohit Shetty as the host.

In the latest promo of KKK 12 (09-07-22), contestant Sriti Jha is seen performing a task in which she is hanging against a wall while supporting herself with the outgrowths on the wall.

She is seen putting her hand in the openings provided in the wall which has huge lizards, spiders and other animals on the other side.

As she is performing the task, she keeps saying sorry every time she touches an animal and this makes everyone laugh, including the host.

The audience will get to see their favourite contestants performing a lot of adventurous tasks and stunts in the episode of KKK 12 on 09 July 2022.

To get to know more, download Khatron Ke Khiladi 12 today's episode or watch the full episode of KKK12 on the Voot app.

Today’s Khatron Ke Khiladi 12 (KKK12) episode starts with Rohit explaining the stunt to the contestants in which they’ll have to be on the roof of a car which will keep drifting, and there will be two boxes on either side of the car which need to be opened with a code.

After the boxes open, there will be some words in the box and some puzzles will appear on the digital screen, and the players have to take the answers out of the box and stick them on the windshield at the target time.

The host tells them that Rubina and Jannat will be performing this stunt.

Rubina goes first and manages to stay still on top of the drifting car, while she tries to enter the codes on the boxes.

Rubina struggles to open the boxes and the other contestants are worried about her, but the time gets over and she doesn’t finish the task.

Jannat performs the task next but finds it difficult to stay still on top of the car.

However, she manages to open the boxes with the codes and then tries to solve the puzzles on the screen.

The letters in the box fly out of the box and she loses some letters but she finishes one word and completes her task.

Rohit reminds them that Jannat didn’t complete the target and only put one word on the windshield.

After the team requests him, Rohit anyways gives a star to their team.

At the next stunt location, they all arrive blindfolded and Rohit reveals a bunch of lions caged behind them.

Rohit informs them that Rajiv and Mohit will be performing the next stunt.

He tells them that they’ll be put in a round cage surrounded by lions and have to collect the discs on the ground.

Rajiv goes first and is put in the cage with the lions around it and he starts panicking.

The lions keep growling which worries Rajiv, but he still manages to get ten discs stuck to the cage in target time.

After that, Mohit goes to perform the stunt but the lion blocks his movement with its paws and he only collects 5 discs, therefore Rajiv’s team wins the star.

At the next stunt location, Rohit has a playful question-answer round with Kanika, before telling them that in the next stunt, they have to get a key from a cage and after that get into a tub to get two more keys.

Next, they have to open the tunnel with one of those keys and cross the tunnel and find a key inside to get out.

There will also be electric wires in the tub and a hyena in the cage with them.

While he explains the stunt, the hyena bites someone’s leg on the crew.

He tells them that Kanika, Shivangi and Aneri would perform the stunt.

Later, Rohit discloses that the whole biting accident was staged only to scare the contestants.

© Copyright tellybest.com, 2022, 2023. All Rights Reserved. Unauthorized use and/or duplication of any material from tellybest.com without written permission is strictly prohibited.
Cached Saved on: Monday 21st of November 2022 12:50:06 AMCached Disp on: Thursday 8th of December 2022 02:45:06 AM