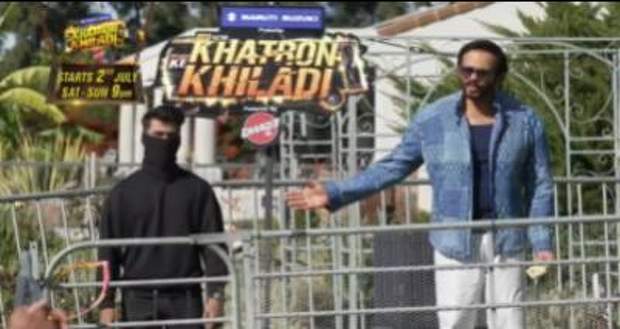 Bollywood director and producer Rohit Shetty, most popular for his action movies is back with another season of Colors TV's famous stunt show Khatron Ke Khiladi 12.

In South Africa along with new contestants, Rohit has brought new daring stunts in his pocket that will test contestants’ ability at every moment and every step.

While she feeds the animal with her heart in her mouth, the other contestants like Kanika Mann, Mohit Malik, Pratik Sehejpal, Sriti Jha, etc. watch Shivangi anxiously, fear visible on their faces.

The audience will get to see their favorite contestants performing a lot of adventurous tasks and stunts in the episode of KKK 12 on 03 July 2022 as the tagline says 'Khatra Kahin Se Bhi Aaega'.

Today’s Khatron Ke Khiladi 12 (KKK12) episode starts with the male and female contestants playing tug of war and trying to win the game by cheating.

Afterward, the contestants wearing the fear fanda are blindfolded and brought to the task location where the safe contestants get surprised to see alligators.

Host Rohit Shetty makes Sriti Jha and Chetna Pande touch unusual things including a baby alligator and guess what it is that they are touching.

All the blindfolds are removed as the contestants get scared seeing the alligators.

Rohit instructs the task in which the unsafe contestants will have to find the alligators with their name belt on them and hook five flags to the belt the earliest to win.

First up are Jannat Zubair and Chetna while Sriti and Aneri Vajani are not allowed to watch since they will be performing the task afterward.

Jannat faints after the task while Chetna wins and becomes safe.

Further, Aneri gets injured and is unable to complete the task which leads to Sriti winning the task and becoming safe.

In the next task, Rohit informs that the remaining unsafe contestants will be airlifted on a platform at a height and will have to transfer flags from one glass to the other glass wall on the other platform.

However, the platforms will be moving away from the task which means they will have to jump farther and farther with increasing time.

Both Mohit and Tushar manage to complete the task and become safe from eliminations.

Lastly, Aneri, Jannat, and Erika have to compete in the elimination stunt in which they have to free themselves from the lock while being stuck in a water-filled tank containing snakes and baby alligators.

Erika fails to complete the task and gets eliminated from the show.

© Copyright tellybest.com, 2022, 2023. All Rights Reserved. Unauthorized use and/or duplication of any material from tellybest.com without written permission is strictly prohibited.
Cached Saved on: Wednesday 25th of January 2023 03:30:37 PMCached Disp on: Sunday 5th of February 2023 12:27:10 PM