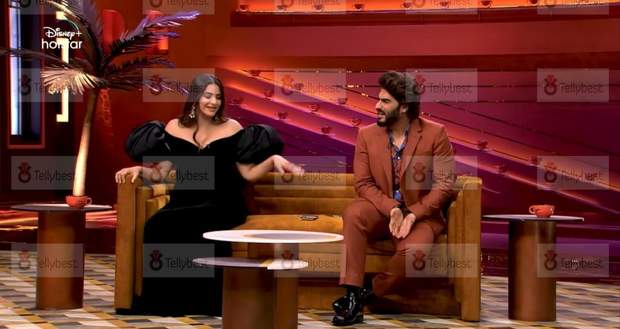 This week, Karan Johar will have a dashing pair of siblings from a star family, Sonam Kapoor, and Arjun Kapoor.

Koffee with Karan 7, this week (11 August 2022) starts with the entry of Arjun Kapoor and Sonam Kapoor as guests for the Raksha Bandhan Special episode.

Sonam Kapoor asks Arjun Kapoor what is the one thing he finds annoying about her to which Arjun replies that Sonam does not wait for anyone to compliment her and does it herself.

The recent promo for Koffee with Karan 7 (11-08-2022) shows Karan questioning Sonam about how many of her friends Arjun has slept with.

Sonam replies that among her "brothers" there is no one left with whom Arjun has not had an affair.

Karan cracks up hearing Sonam's answer and asks her what kind of brothers she has.

Today’s Koffee with Karan 7 starts with Karan saying that he sometimes wants to get married so that he gets not to invite those people who did not invite him to their weddings.

Karan calls the Kapoor cousins, Sonam Kapoor Ahuja and Arjun Kapoor, and introduces them as S&M referring to Sonam as sensational and Arjun as a mascot.

Karan tells Sonam that her episode with Deepika in the past broke the internet without any effort because Sonam is hilarious in real life to which Arjun instantly agrees.

Karan shares some tweets with Sonam and Arjun about how people have been asking Sonam to come back to Koffee with Karan to make memes.

Giving Sonam the credit of being the first person to start the trend of clicking fashion pictures. Karan asks what she thinks about the current fashion agenda of Bollywood.

Sonam thanked Karan for giving her credit but she says that she started clicking pictures because her clothes are mostly borrowed for events and she felt that it was her duty to give credit to the designer by showing off the dress properly.

Sonam says that she is not in the place to give judgment about others’ fashion when she has been trolled for her fashion in Cannes.

Karan says that in this year’s Cannes, Indians failed to show their fashionista side and answers that Deepika looked the best on Sonam’s questioning.

Next, Karan praises Arjun Kapoor for his amazing body transformation and shows him some tweets that complement and troll him.

As Karan asked him what Arjun’s plan was when he started his body transformation, Arjun answered that he is very passionate about cinema and presented himself in a certain way with his appearance in his debut years and received love for it as well.

But as he continued to work and reached his bottom with regular unsuccessful films, the public started to view him as a “lazy, unbothered, laid back, incapable” person which he wanted to change.

After being trolled on social media for his dating life and career, Arjun realized that he is not the person they are labeling him as and so he decided to change himself a bit so that people know that he cares about himself.

Sonam tells Karan that she and Arjun have always been together since childhood and have a close relationship so she will definitely support Arjun in anything that makes him happy, let it be his relationship with Malaika Arora Khan.

Arjun felt warmhearted on hearing Sonam’s reply to his relationship which saw huge opposition from everyone and kissed her on the cheek.

Karan asks Arjun why he took baby steps regarding his relationship with Malaika.

Arjun replies that he was trying to be understanding and empathetic to the people around them who are close as they are the main foundations of their lives. Being brought up as a son, Arjun has built an understanding and knows how to ease people calmly without pushing them because, at the end of the day, all will be well if there is love.

Coming to Arjun’s family, Karan tells them that Malaika told him that she met with Arjun’s grandmother recently which seems to be the last of the baby steps. Arjun laughs a bit and replies that his family and friends made it much easier for him to come out open about his relationship.

Arjun says that he wants to be a bit more stable in his career before he plans to take the next step of marriage with Malaika.

Arjun says Sonam is a mess after she tells them that “Ek villain” which is Arjun’s upcoming film is a thirst trap film with hot people.

Karan asks Sonam if she has changed her beauty regime during her pregnancy to which Sonam answers that a lot of it has to do with the “to be a mom” glow but she has started to use the Momsco skincare range which is awesome.

Sonam and Arjun play the sibling troll game where they have to ask each other questions mentioned in the cards.

Sonam asks Arjun what are the three most annoying things about her to which Arjun replies that she is a “foot in her mouth” person, naïve, and unknowingly stupid sometimes.

Arjun asks Sonam what is his biggest flaw to which Sonam replies that Arjun is oversensitive which is not a good thing in this industry.

As the question “who is the sluttier sibling between us?” comes, Arjun gets heavily roasted by Sonam but he says that he has retired now that he is in a relationship. Karan asks Arjun to stop being a 2.0 version of himself as they know well what is going on in his mind.

Sonam reveals that there are no “brothers” of her with whom Arjun has not slept in the past which leaves Arjun speechless as he asks Sonam about what she is talking about. (Sonam means Arjun is too comfortable with his homies or her friends are like "bros" to her)

Arjun shares a story with Karan about when he got suspended from school because he fought with a boy who was apparently verbally molesting Sonam. However, Sonam tells that both the boys got suspended which makes Arjun irritated as he was narrating the story.

Sonam and Arjun play the rapid-fire round where Sonam mistakes Ranbir’s upcoming film “Brahmastra" as “Shiva no.1”.

Arjun wins the rapid-fire round with 74% votes from the coffee gang.

Arjun calls Sonam “Ghajini Kapoor” after she tends to forget everything about what’s going on around currently.

Sonam and Arjun play the game round and it ends with Arjun winning this round also.

The episode ends with Sonam and Arjun signing their coffee mugs and keeping them on the Koffee wall for showcasing. 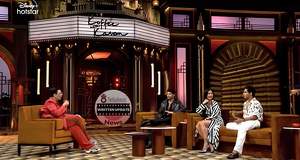 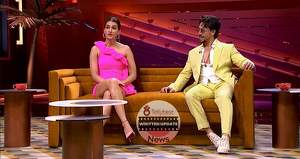 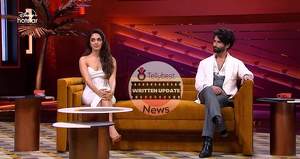